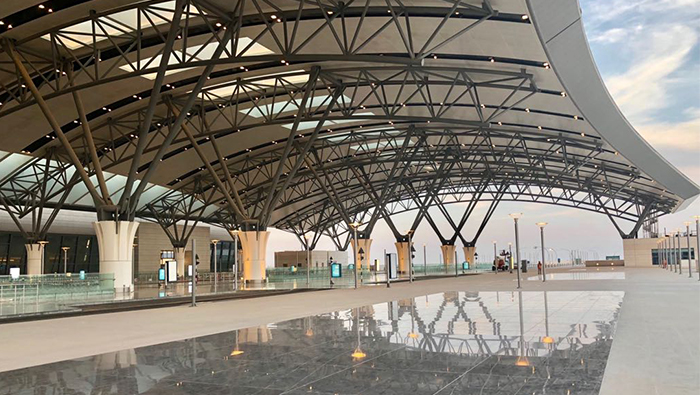 Muscat: Oman’s new airport, a “focal point for the world,” will officially open on March 20 this year, officials have revealed.
The new passenger terminal at Muscat International Airport will begin commercial operations from that date, the Ministry of Transport has announced.
“All incoming flights and departures from the current airport will be transferred to the new terminal,” a ministry statement declared.
Dr Ahmed Al Futaisi, Minister of Transport and Communications, said: “The ministry and its strategic partners are ready to begin operations after the final confirmation that all systems are ready, following the conclusion of the recently conducted operational tests.”
He added that the new Muscat International Airport will be a symbol of the modern state being built by His Majesty Sultan Qaboos bin Said.
“It is great news. We have been waiting for this moment for a long time,” said a senior OAMC official. “Now, we can make preparations for the final countdown,” he added.
The national carrier, Oman Air, also released a statement: “We congratulate the Ministry of Transport and Communication for all the great work and efforts made in getting the new airport ready.
“Oman Air looks forward to using the new airport and offering our respected guests the opportunity to experience a new level of unmatched service.”
Ali, a resident of Muscat, added, “I’m happy it’s finally opening. It’s great because travel will now be much easier for my family during holidays. Before, travelling used to be a bit of a hassle because of crowds at the airport, but with the new terminal, everything should be a lot smoother and more relaxing.”
Michelle Callaje, a senior sales travel consultant at Travel Point, is looking forward to the influx of tourists the new airport will bring.
“When tourists come to visit a foreign nation on holiday, they like having good facilities that are easy to access and provide them with good service, and I think this new airport will be good for Oman as it will attract more tourists,” she told Times of Oman.
“In addition, Oman Air and many of the regional airlines are also setting up more long-haul flights, and because the new airport has more capacity and better facilities, this also means more tourists for Oman.
Spread across an area of 335,000 square metres, the new airport will be able to handle more than 20 million passengers per year, with plans to increase the capacity to 48 million in the future.
The new facilities include 6,000 square metres of Duty-Free shopping, 8,000 parking spaces and 96 check-in counters.
The building includes 149 elevators. The northern car park has five levels and accommodates over 1,100 parking slots, while the five-level southern car park can accommodate some 1,200 parking spots.
The external works of the Muscat International Airport Project include 2,054 covered parking slots, 2,262 open parking spots, and 406 parking spaces for airport employees.
There will be 82 counters for the Royal Oman Police and the new passenger building will have two main gates to accommodate heavy aircraft such as the A380 and B747.
Ten 7-km-long luggage delivery belts, with two for domestic flights, with a capacity of 5,200 bags per hour, have been built.
The total area of the passenger building is 580,000 square metres and the passenger terminal comprises three suites, each with three levels. The retail outlets are located on both sides of the building and cover an area of 12,000 square metres. There are lounges for first class and business class passengers, and offices for airlines, car rental agencies, information, and other services. The building also accommodates a four-star hotel with 90 rooms, swimming pools, and food lounges.
There are 40 aerial bridges for the movement of passengers, and 29 waiting areas.
The ministry called upon all relevant parties to make the necessary arrangements to ensure the smooth transition of operations and passenger traffic at the new airport.
Dr. Al-Futaisi stressed that the ministry and its strategic partners are ready to operate the building after final confirmation of the readiness of all its systems through the operational tests conducted during the past period with the participation of nearly 6,200 volunteer residents and simulation of more than 500 flights.