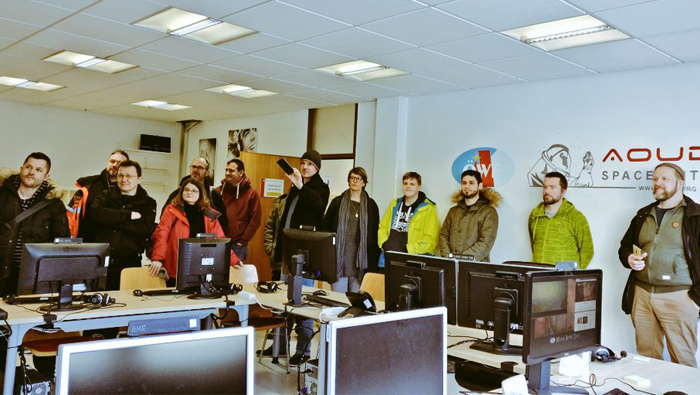 Muscat: Oman’s landscape is so stunningly similar to Mars that it formed the perfect location to carry out space simulation missions.
The Austrian Space Forum (OeWF or Oesterreiches Weltraum Forum) have arrived in Oman to carry out a series of experiments – titled AMADEE-18 – with a view to one day put a man on the Martian surface.
“The magnificent deserts of Oman are a superb surrogate for mimicking the search for life on Mars,” said Dr. Gernot Gromer, Field Commander, AMADEE-18.
“It is an area which is so stunningly similar to Mars, we just had to go there because this is greater fidelity, more fidelity.
“During the AMADEE-18 expedition, we will be mimicking the search for life on the Red Planet, so it will be a unique combination of instruments which are likely to be deployed on the Red Planet, included in an operation scenario,” he added.
Around 20 experiments will be conducted in Oman, and these include simulations of the new Aouda spacesuit, testing a range of Mars rovers, new water detection systems and even a new portable greenhouse to grow food in space.
“We don’t know who will be the first people to take the first step on Mars, we just believe that the very first human to walk on Mars is already born,” revealed Gromer.
“But all ships who have ever left their shores, everything that ever sailed abroad, needs someone like a shipbuilder, people who are actually training and defining workflows of how to operate those ships, and we are those shipbuilders.
“Whatever the mission to Mars will look like, we will be part of that in the future and that’s closer to Mars.” Stefan Dobrovolny, analogue astronaut for AMADEE-18 added: “This mission is wholeheartedly embraced by science,” he said. “We are bringing 18 outstanding experiments to the deserts of Oman and I am really looking forward to the scientific data which will be published afterwards.
“The desert landscapes of Oman and Mars and very similar. It makes our mission particularly realistic and I am very curious to see how these conditions affect me in the spacesuit simulator,” explained Dobrovolny. “Although not all of us have fully understood our own planet, it is only natural that we always seek new goals in future. This mission and its resulting discoveries bring us one step closer to determining the Red Planet.”