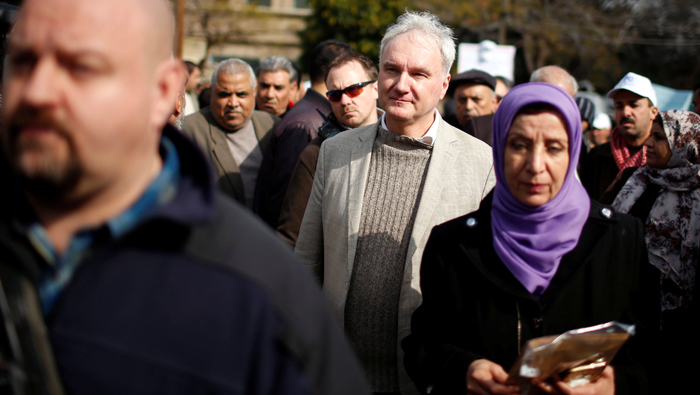 Geneva: Almost a dozen countries have agreed to advance their annual contributions to the U.N. agency for Palestinian refugees to help it plug a major shortfall after a partial cut-off of U.S. funding, its chief said on Tuesday.
The move by the Trump administration appears linked to a United Nations vote rejecting Washington's recognition of Jerusalem as Israel's capital, said Pierre Kraehenbuehl, head of the U.N. Relief and Works Agency (UNRWA).
The United States said this month it would withhold $65 million of $125 million it had planned to send to UNRWA, which runs schools and clinics for 5.3 million Palestinians across the Middle East, including in Gaza and the West Bank.
"It is very clear that the decision by the United States was not related to our performance," Kraehenbuehl told a news briefing, citing his "very good meetings" with senior U.S. officials in Washington in November.
"This has to be part of the debate that took place around Jerusalem, the vote on Jerusalem at the (U.N.) General Assembly. "And I simply note here again that humanitarian funding should be preserved from being tied up with political considerations," he added.
Eleven countries have agreed to advance their donations to finance UNRWA programmes in coming months, Kraehenbuehl said after meeting donor representatives, adding: "There a sense of coming together."
Seven countries - Switzerland, Finland, Denmark, Sweden, Norway, Germany and Russia - had already transferred early funds while four - Belgium, Kuwait, the Netherlands and Ireland - had pledged to do so soon, he said.
Kraehenbuehl launched an appeal for some $800 million to provide aid to Palestinian refugees in Syria, Lebanon, Jordan and the Palestinian territories this year.
He said UNRWA received $360 million from the United States last year but Washington had cleared only $60 million for 2018 - a drop of $300 million that he called "a very severe and dramatic change".
UNRWA is supported almost entirely by voluntary contributions from states and the United States is the largest contributor. U.S. President Donald Trump has questioned the value of such funding, and the U.S. State Department said UNRWA needed to make unspecified reforms.
Trump's endorsement in December of Israel's claim to Jerusalem as its capital drew universal condemnation from Arab leaders and criticism around the world. It broke with decades of U.S. policy that the city's status must be decided in peace negotiations between Israel and the Palestinians.
More than 120 countries defied Trump on December 22 and voted in favour of a U.N. General Assembly resolution calling for the United States to drop its recognition of Jerusalem as Israel's capital.