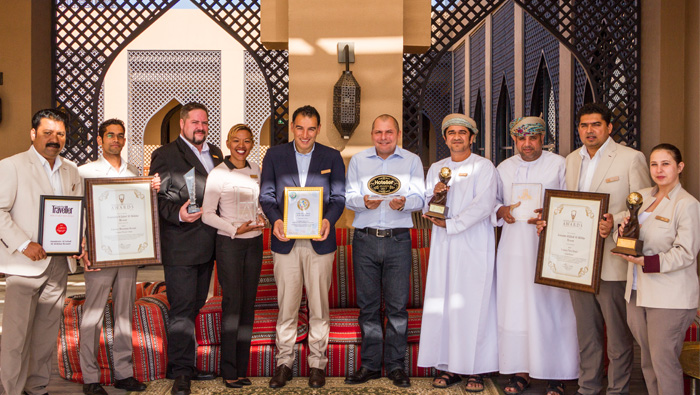 Muscat: The hard work and dedication of luxury resort Anantara Jabal Akhdhar’s team has been the secret to its success, earning it 16 awards in 2017.
This is the view held by Firas Rashid, the resort’s director of sales and marketing.
The resort plans on continuing to rank among the best Oman has to offer to visitors from across the globe.
“One of the highlights was the Luxury New Hotel Globally for 2017 award, and this is a global recognition that I received myself at the World Luxury Hotel Awards,” he recalled.
“We were the global winner, and this is not just based on one country or one region, so it is a fantastic recognition. This is a strong endorsement of the good work of the team and just how beautiful the location and the resort is.
Conde Nast
“One of our regional awards came from Conde Nast, based on guest votes, so this is also a very good reflection of what we have been doing. Another one we received was the Green Globe award for our environmental initiatives because we use environmentally friendly methods to operate our resort,” added Rashid.
Rashid was quick to thank all of Anantara’s partners who helped make their success a reality.
“It was not easy earning this achievement, and I must thank everyone who made this possible because the people here are sacrificing their own time and their personal lives to live here in an area that is isolated and away from the city and civilisation,” he admitted.
“We have travelled the world to promote Anantara Jabal Akhdar and Oman as a destination in trade shows and travel expos, and one of the most significant investments we have made is to invite the global media to Anantara, so they can see and experience the quality of our hospitality, all the way from the United States, Australia, Germany, the United Kingdom, and Russia, among others. We also invited journalists and social media influencers to experience Jabal Akhdar,” elaborated Rashid.
“The Ministry of Tourism, Oman Air, and Qatar Airways have offered us great support in this matter,” he explained.
Sponsors
“For example, Qatar Airways sponsored seven business class tickets from Muscat to New York, and these cost about OMR25,000. Oman Air sponsored tickets from wherever they fly, such as the United Kingdom, Italy, China, Thailand, Germany and the GCC, while Qatar Airways sponsored flights from the United States, Singapore, Russia and Australia because they also want to promote Oman as a destination.
“Each ticket costs about OMR2,000 to OMR3,000,” he noted. We collaborated with the Chedi for some events so that these foreign guests could experience Muscat.”
Anantara’s plans for 2018 are not only to match what they did in 2017 but to do better.
Oman tourism
“The efforts from Oman Tourism’s overseas office in Italy, France and the United Kingdom have also been instrumental in helping us achieve this,” stated Rashid.
“We had France 2 TV come here to shoot a travelogue on Jabal Akdhar, and that was because of the fantastic work done by Oman Tourism to promote the destination.
“I believe the continuation of the hard work and our involvement with the local culture will help us grow in future,” he added.
“In March, for example, it is the rose harvest season, so all of our Valentine offerings will feature rosewater. In summer, we have the ‘Beat the Heat’ campaign because Jabal Akdhar is cooler than the rest of Oman, so we want this message of the country’s heritage and culture to be spread through all our entities across Oman.”