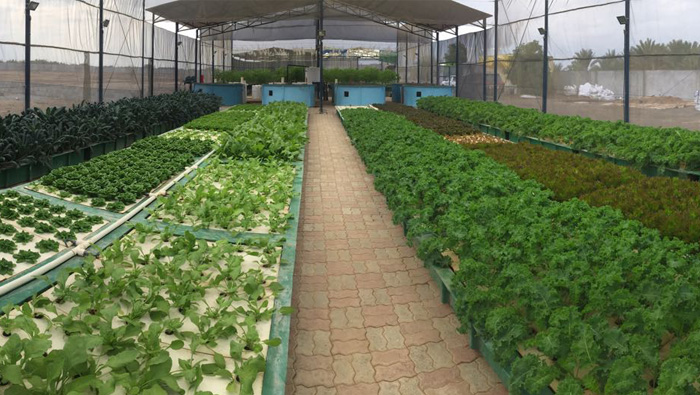 Muscat: The low cost of setting up an aquaponics farm and the minimal amount of water required for it to thrive makes it ideal for Oman to use as the Sultanate looks to achieve food security.
That’s the opinion of Murray Hallam, who’s been widely hailed as the godfather of commercial aquaponics. One of Hallam’s students is Arvind Venkataraman, who is project engineer for Al Arfan Farms, Oman’s first aquaponics farm that has been built on a one-acre plot of land in Seeb. As the founder of Water Farmers Aquaponics, he has set up more than 15 farms worldwide.
“As soon as I saw this working, I believed it was the food production system for the future, and I still believe it has the scale to solve the world’s food problems,” explained Hallam. “If we were to take Oman as an example, this country imports a lot of its food and it is scary that it doesn’t grow enough food, so it is a perfect fit for it.
“I am a famer’s child and I just wanted to grow vegetables for my family’s home use, but for a long time I lived in a part of Australia that had a prolonged drought so we had no water,” he added. “At that time, there was all this research about growing fish and farm crops together, where the water the fish lived in would also serve as water for the plants to grow in, and where the waste produced by the fish would serve as nutrients for the plants and I’d heard that this used very little water.”
Aquaponics thrives due to a symbiotic relationship between fish and plants. Food is fed to fish, and the highly nutritious excrement they produce acts as natural fertiliser to grow crops. “That was only 14 years ago, and if you Googled aquaponics at the time, the information you’d find would amount to less than one page,” said Hallam, who decided to share his research with the world on his website, www.aquaponics.net.au. “We initially set up a website and then began getting calls from around the world.
“Water in Oman is available at a premium, and because aquaponics uses such little water, it is perfect for areas like this,” he added. “Aquaponics also doesn’t use pesticides and insecticides because if we do that, it would kill the fish. It provides food security and food purity, so these are the two important aspects,” he said.
If you can grow two things with just one input, this is really good efficiency and most farming does not do that.
“Some people ask me if there is some sort of secret ingredient we use, but whenever people and organisations see it work, they’re very excited to establish their own set up and grow their own food. It’s definitely a technology for this time,” said Hallam.
With meat and veggies being the two most important food groups the world over, Hallam is confident aquaponics will continue to address food security needs.
“Fish and plant growing has been associated for a very long time, but modern-day aquaponics is a probably the best way of doing it because there is no wasted water, no wasted food, and electricity cost is low for such a high-density compact area,” he said. “You normally need a large farm and then you have to protect it from the environment, but all you need here is a greenhouse-like structure and then you are good to go.
“It was fashionable 15 or 20 years ago to say that we were one big global economy, but now people are realising that that’s not so smart, because what if our shipping lanes are cut, what if economic disaster stops us from feeding ourselves?” asked Hallam.
“People realise that if you have food in your own cupboard, you can take care of yourself.”