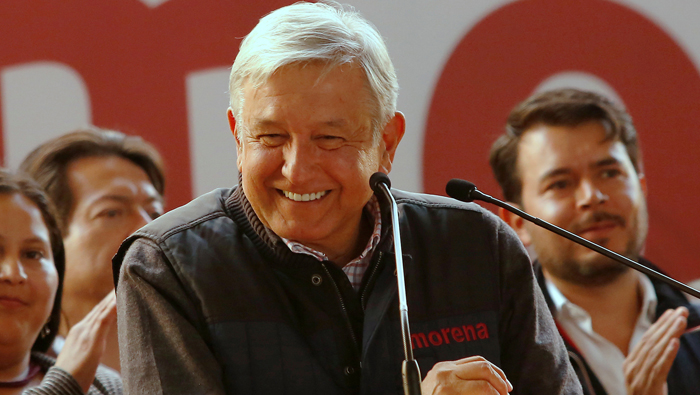 Mexico City: Leftist politician Andres Manuel Lopez Obrador has consolidated support in his bid for the Mexican presidency, but the race has tightened as another opposition contender gained ground while the ruling party hopeful trailed, a poll showed on Monday.
The January 19-25 voter survey by Buendia & Laredo showed Lopez Obrador winning 32 per cent of support, while Ricardo Anaya, the former chairman of the conservative National Action Party (PAN) leading a right-left coalition, had 26 per cent. Back in third place, with 16 per cent support ahead of the July 1 election, was Jose Antonio Meade, an ex-finance minister seeking the nomination of the ruling Institutional Revolutionary Party (PRI), the poll published in newspaper El Universal showed.
The PRI will not formally choose its candidate until February 18. However, the party's leaders are behind Meade, and he is widely expected to be confirmed as their candidate despite some internal grumbling about how the campaign is proceeding.
A separate survey earlier this month also showed Meade failing to gain traction. If that trend persists, it would turn the election into a head-to-head contest between former Mexico City mayor Lopez Obrador, 64, and Anaya, 38.
A December 6 Buendia & Laredo poll gave Lopez Obrador 31 per cent backing of voters, Anaya 23 per cent and Meade 16 per cent.
However, the December survey had only 13 per cent undecided voters, while there were 20 per cent in this month's poll. That means the gaps separating the three main contenders would be wider in January if those voters were discounted.
Lopez Obrador, the runner-up in the past two presidential contests, has been a polarizing figure in Mexican politics, especially since he brought much of the capital to a standstill with massive protests when he narrowly lost the 2006 election.
But the new survey showed his image had improved. Some 49 per cent of respondents held a positive view of him in January, compared with 44 per cent in December. At the same time, the percentage of respondents with a negative opinion of him fell to 25 per cent from 32 per cent. That net positive balance of 24 points was well ahead of Anaya, whose positives outweighed his negatives by 11 points. The latest poll was based on 1,002 interviews and had a margin of error of 3.53 percentage points.