Compromise, German SPD's Schulz urges his own party and Merkel 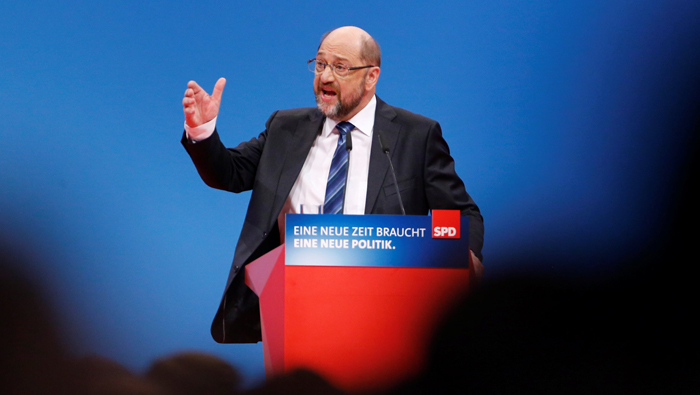 Berlin: The leader of Germany's Social Democrats (SPD) called on party rank-and-file to show readiness to compromise when they vote on the outcome of coalition talks with Chancellor Angela Merkel's conservatives, amid growing nervousness about the ballot.
Leader Martin Schulz promised the party's restive membership a vote to ratify any decision to sign up for four more years of "grand coalition" government with the conservatives, tying both his and Merkel's careers to the poll's outcome.
"I have to convince the party's 440,000 members," he told ARD television immediately before leaving for Sunday evening talks with his conservative counterparts, adding a warning for Merkel and Horst Seehofer, leader of the Bavarian conservatives.
"We are certainly ready to compromise. But we also expect the conservatives to move," he said, in an apparent attempt to leverage the threat of a veto by party membership in order to extract concessions from a reluctant conservative camp.
As he spoke, Merkel and Seehofer were holding one-to-one talks in preparation for Schulz's arrival. The two camps hope to reach a final coalition deal by next Sunday, which would allow a new government to be formed by Easter.
Party members are unhappy with a draft deal reached with the conservatives, especially in the areas of health insurance and family reunification for refugees, where the radical "Jusos" youth wing wants Germany to be more generous.
The Jusos are busy recruiting new members to the party in the hope that they will vote down the coalition deal, making way for the SPD to reinvent itself in opposition after scoring disastrous losses in September's national election. This is adding to pressure on negotiators to reach a deal and end an unprecedented four months' interregnum in Europe's political and economic behemoth.
The party's presidency will decide on Monday on when to set the cut-off date after which new members will not be eligible to participate in the ballot. In a sign that even the hardest-line conservatives are concerned an SPD membership veto could end up scuppering a deal, a senior Bavarian conservative invited the SPD to make proposals on family reunification, implying there was room for compromise.
"The crucial thing is that the immigration cap of between 180,000 and 220,000 arrivals a year not be exceeded," said Joachim Herrmann, Bavaria's interior minister, in an interview with the Passauer Neue Presse. Until now, Bavaria's conservatives have been the strongest opponents of compromise.