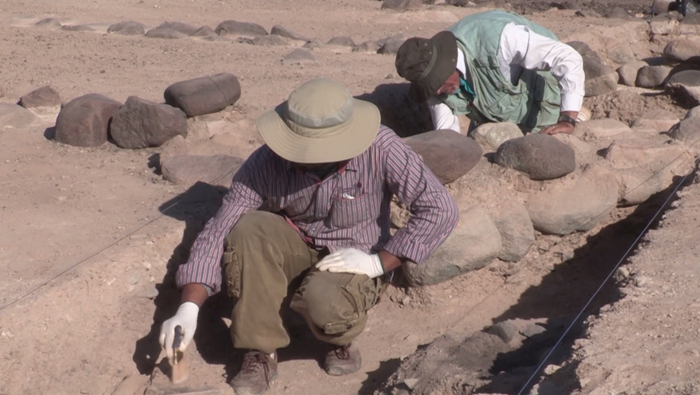 Al Mudhaibi: Preliminary excavations have revealed an ancient civilisation dating back to from 2500 to 2000 BC in the Wilayat of Al Mudhaibi.
The Ministry of Heritage and Culture and the Sultan Qaboos University (SQU) began the archaeological excavation in the town of Al Ghareen in the Niyabat of Samad Al Shan in the Wilayat of Al Mudhaibi in the Governorate of North A’Sharqiyah.
The preliminary excavations revealed the ancient civilisation of Oman, which indicated the old commercial association with the civilisations of Dilmun, Sindh, Mesopotamia and Iran.
Dr. Khalid Ahmed Daghlash, Head of Archeology Department at SQU, said that the discovered belongs to the ancient civilisation of Oman from 2500 to 2000 BC and represents a very ancient settlement.
He added that Archeology Department at SQU started excavation since 2004/2005 and currently they work with the Ministry of Heritage and Culture to conduct excavations and surveys on the site to identify its historical and archaeological stages.
He explained that the excavation revealed the presence of a large settlement of at least more than 50 buildings, in addition to a large building which represents a distinctive architectural features of the ancient civilisation of Oman with an estimated diameter of 20-25 meters and height of 4-6 meters, where the tower was built of stones, with a wall of more than two meters wide.
Head of Archeology Department at SQU said that the preliminary observations on this tower show that it passed through several stages of architecture.
The first phase included the construction of the tower and after a period of time the tower was exposed to demolition and vandalism, after which the inhabitants abandoned the place for a certain period of time.
In the early stage the work was in copper industry because of the presence of indicators on the surface of the site.