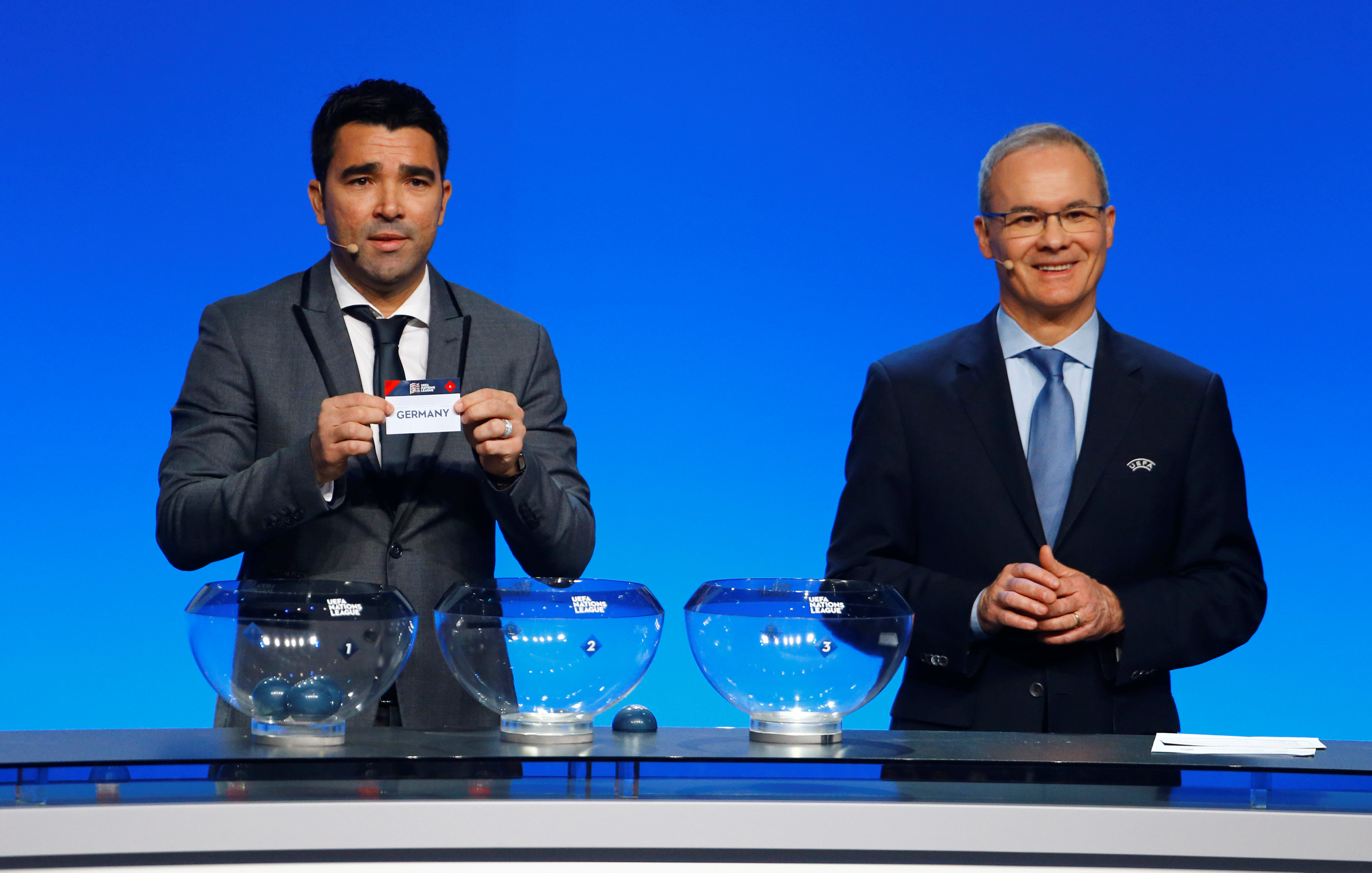 Lausanne: Germany will face old rivals France and the Netherlands after the trio were drawn together in the same three-team group for the inaugural UEFA Nations League, the latest addition to the football calendar, on Wednesday.
The trio will feature in Group One of League A, the top division of the four-tier tournament that UEFA has introduced to replace international friendlies and which will run alongside the traditional European championship qualifiers.
It was an early boost for the competition which critics say is too complex, adds to an already crowded calendar and, because it provides an additional path to tournaments such as Euro 2020, makes it too easy for the top teams to qualify.
UEFA, concerned that international football is losing popularity to the club game, argues that the league will provide the top nations with more competitive matches against each other.
In the other League A groups, Italy, who failed to qualify for this year's World Cup finals, will face European champions Portugal and Poland in Group Three while Spain take on England and Croatia in Group Four.
Belgium will meet Switzerland and Iceland in Group Two, arguably the easiest.
The Nations League features all 55 of Europe's national teams divided into four divisions -- Leagues A to D -- that are themselves split into four groups, to be played between September and November.
In League A, the winners of each group qualify for the semi-finals, which will be played in June 2019, followed by the final. The four last-placed teams are relegated to League B.
In the other leagues, the four group winners are promoted and last team in each group goes down.
Each league also has one place at Euro 2020, offering a back door for teams who do not qualify through the regular qualifiers.
This mechanism guarantees that one fourth-tier side -- such as Georgia, Azerbaijan, Faroe Islands or Malta -- will reach Euro 2020.
Germany coach Joachim Loew said the new competition was "really interesting."
"I like these kind of games," he told reporters. "France is a big nation, very good players, and Netherlands too, so it's interesting for us, our players and of course our fans. It's better than the friendly games we have sometimes.
"I'm really happy."
Poland coach Adam Nawalka agreed. "It's a very good idea to have this competition instead of friendlies, we have a very interesting group with the European champions Portugal and four-times world champions Italy," he said.
Portugal coach Fernando Santos told UEFA's website: "One of the positives with this competition is more games between teams of a similar standard.
"Some countries knew they will always struggle to get to a World Cup or a EURO, and they will now have another reason to invest in grassroots development and, of course, all European football will benefit from that."

Draw for the inaugural Nations League:

LEAGUE A
Group One

UEFA Nations League: how it works
* The competition is played alongside the Euro 2020 qualifiers which will be staged as usual under the traditional format.
* The Nations League is divided into four divisions, based on the UEFA rankings. Europe’s strongest teams are therefore in the top division, known as League A, and the weakest in League D. Each division is itself divided into four groups.
* League A consists of 12 teams, split into four groups of three. The teams play twice against every other team in their group, home and away, between September and November.
The winners of each group qualify for the Nations League Finals, consisting of two semifinals, a third place match and a final, which will be played in a single country in June 2019.
The venue will be chosen from one of the four semifinalists by UEFA in December.
The bottom four teams in each group will be relegated to League B.
* League B also consists of 12 teams and will operate a similar system to League A. The four group winners will be promoted to League A and the bottom team in each group relegated to League C.
* Leagues C and D will use the same format as the top two leagues but with more teams. League C will consist of 15 teams split into one group of three and three groups of four; League D will have four groups of four, and no relegation.
* The competition also offers a back door to Euro 2020 with four places up for grabs, one for each league, to be played in March 2020.
In each league, the four group winners enter a playoff system, consisting of two semifinals and a final. The ultimate winners will qualify for Euro 2020.
* If a group winner has qualified for Euro 2020 via the regular qualifying competition, their place in the playoffs is taken by the next-best ranked team in their league -- not the second-placed team in the group.
* If a league does have not enough teams to fill all four playoff spots -- because nine or more of its teams have reached Euro 2020 via the regular qualifying competition -- those places will be taken by the highest-ranked teams from the lower leagues who have not yet qualified for the playoffs as group winners.