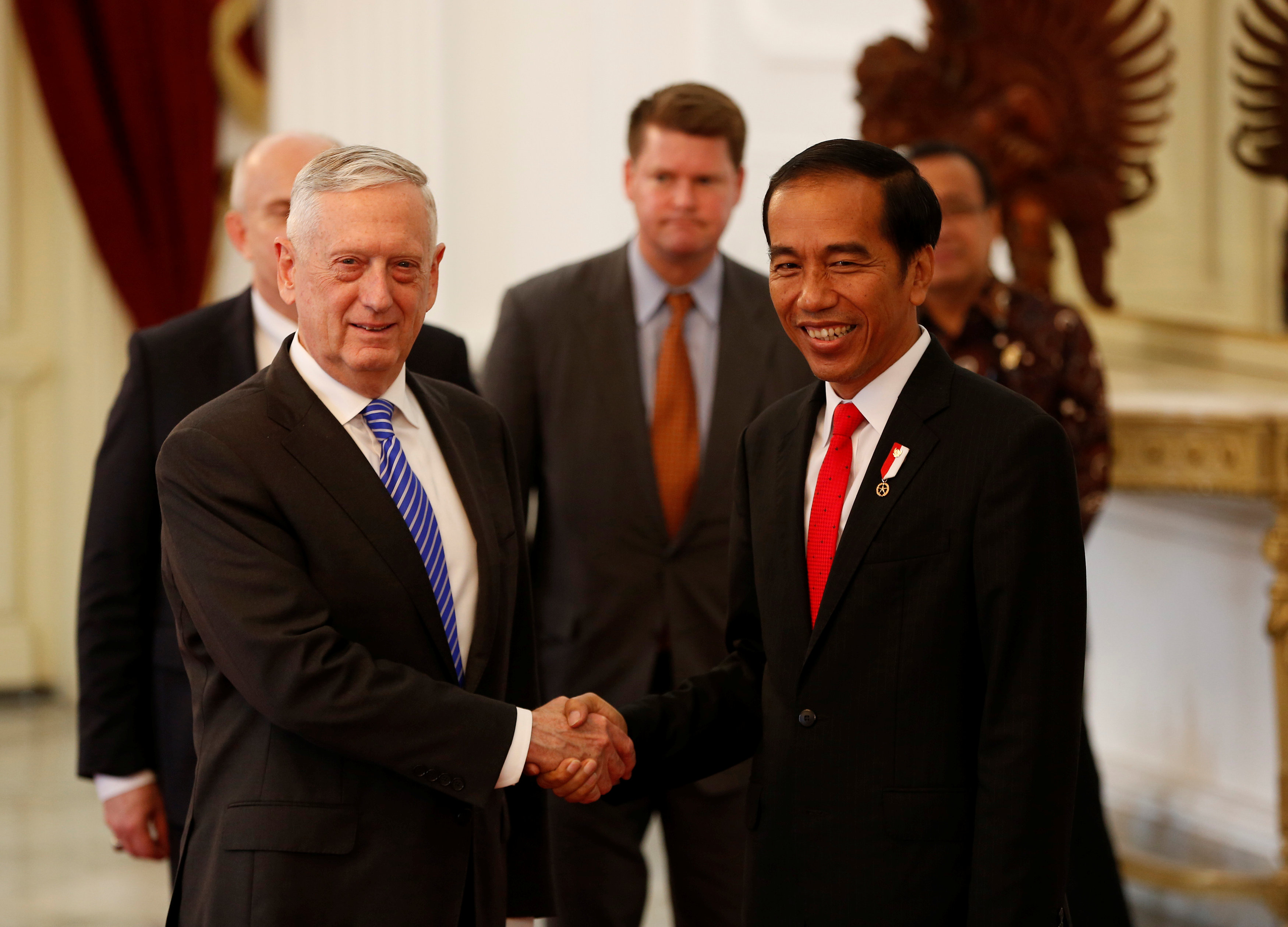 Jakarta: US Defence Secretary Jim Mattis saw Indonesian troops drink snake blood, roll in glass, break bricks with their heads, walk on fire, and more, in a rare military demonstration on Wednesday meant to show the unique skills of Indonesia's military.
Pentagon chiefs are accustomed to seeing foreign forces carry out more routine military demonstrations during foreign travel and, ahead of Wednesday's event, the press traveling with Mattis was expecting a hostage rescue drill.
The ceremony at Indonesia's armed forces headquarters was far more theatrical, however, even featuring a blindfolded soldier shoot out a balloon held between the legs of one of his colleagues.
At least one shot missed, although no one appeared injured.
To the sounds of beating drums, the Indonesian soldiers performed a series of gripping martial arts techniques, breaking what appeared to be concrete bricks with their heads. They also smashed stacks of burning blocks with their hands.
Wearing a hood to blind him, one knife-wielding Indonesian soldier slashed away at a cucumber sticking out of his colleague's mouth, coming just inches from striking his nose with the long blade.
Perhaps the highlight was a demonstration involving live snakes, which Indonesian forces brought out in bags and scattered on the ground, just feet from where Mattis was standing. That included a King Cobra, which widened its neck as it if were going to attack.
The soldiers then cut off the snake heads and fed the snake blood to each other, as the crowd looked on. At least one Indonesian soldier bit a snake in half.
At the end of the demonstration, to the tune of the movie "Mission Impossible," the Indonesian forces carried out a hostage rescue operation, deploying stealthily from helicopters - with police dogs. The dogs intercepted the gunman.
"As you can see, the dogs bit the terrorist," the narrator concluded.
Mattis appeared to enjoy the demonstration, which came at the end of a three-day visit to Indonesia, and spoke about how the Indonesian forces were smart to wear the snakes down before trying to handle them.
"The snakes! Did you see them tire them out and then grab them? The way they were whipping them around - a snake gets tired very quickly," he told reporters as he flew to Vietnam.
Indonesian forces are active in jungle conditions and do have to deal with snakes at times.
The demonstration also showed the intensity of the training of Indonesian forces, Mattis said.
"You could imagine how much training went into each individual there, that they were able to do that," he said. "When you watch a force do that, many small things, perfectly, you can imagine that they can also put the bigger things together."
Reuters