Here are the winners of Oman Entrepreneurship Awards 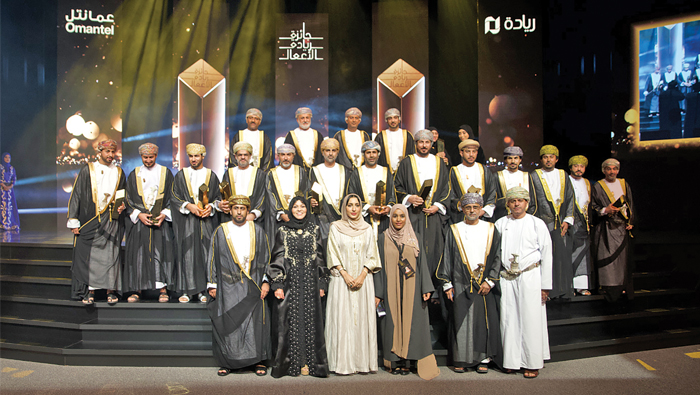 Muscat: A total of 13 victors were honoured at the third edition of the Entrepreneurship Award which concluded on Tuesday.
The winners in the Award’s three main categories, included three in the Entrepreneurship Award, eight in the Entrepreneurship Award for Small and Medium Enterprises (SME) and two in Entrepreneurship Award for Supporting Organisations.
Three awards were withheld due to lack of suitable candidates, which included Best SME Development Award, Best Support from a Government Institution and Best Small Business – Industrial.
Held under the patronage of Sheikh Abdulmalik bin Abdullah Al Khalili, Minister of Justice, the event was attended by many renowned personalities, including high level officials in the government, delegates from the State Council and Majlis Al Shura, private sector leaders as well as entrepreneurs.
The winners
National Bank of Oman won the ‘Best Financial Support’, followed by ORPIC, who scooped the ‘Best Support from a Large Company’.
Dates Sohar was crowned the ‘Best Home Business’, whereas, the ‘Best Micro Business’ was given to two companies - second place went to Continental Shelf of Solar Tech and Innovation Factory was bestowed with the first place.
Nizwa Eye Speciality Centre took ‘Best Small Business’ in the services sector and in the trading sector, A’tabassur Information Technology won.
Ruken Al Pizza received the ‘Best Medium Business’ in the services sector and in the industrial sector, Capital Construction and Commercial Projects stole the spotlight.
The ‘Best Medium Business – Trading’ went to Al Fakhama Al Mustaqbaliya.
‘Best Media Initiative’ was given to AfkarwaTumoh Radio Show, Public Authority for Radio and Television. Intilaaqah, Shell won the ‘Best Educational Initiative’. The ‘Best Entrepreneur’ title was given to Othman Maktoum Ali Al Manthari.
Tariq bin Suliman Al Farsi, Chief Executive Officer of Al Raffd Fund and Chairman of the Entrepreneurship Award Committee, praised the role played by the Award and its great value in enriching experiences of entrepreneurs and in promoting a culture of cooperation among all segments of the society.
“The third edition of the Entrepreneurship Award attracted 398 applications in its various categories from service, commercial and industrial sectors,” said Al Farsi.
“These applications reflected a significant increase in the level of awareness among applicants regarding the importance of data needed to successfully complete the registration process,” he added.
The quality of initiatives applied for participation by both government and private sectors are evidence of commitment to support and develop SMEs and recognize their importance in realizing the national goals.
The Award aims to augment the capacity of entrepreneurship and SMEs to be effective contributors to an evolving economy, based on technical know-how, research, latest skillsets and innovation.
The initiative seeks to add in-country value by working with local allies and generating jobs for Omani nationals, driving the country to a well established and diversified economy.
The Award also aims to strengthen the performances of micro, small and medium enterprises whilst building their capabilities to prepare them for a competitive market.
Apart from the announcement of winners, the ceremony’s programme included a timeline of the Award team’s activities, films on the potential of Omani SMEs through highlighting businesses and sectors of the Award’s previous winners as well as the jury phase,and a group photo towards the end of the event.
The guest of honour was presented with a souvenir as a token of appreciation.The Entrepreneurship Award was developed as a result of the ‘Developing SMEs Forum’, held in Saih Al Shamekhat, Bahla, 2013.