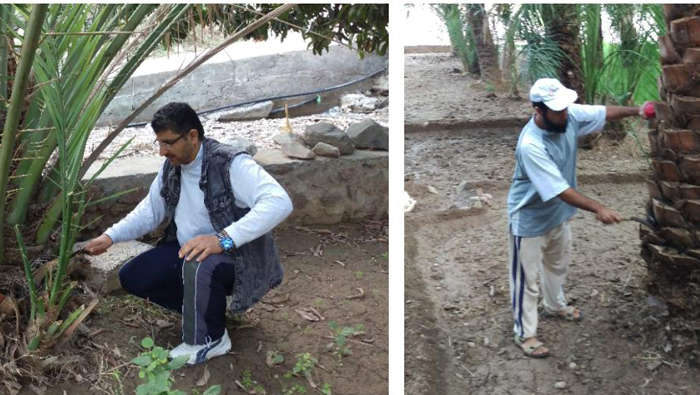 Muscat: Twenty one areas around the Sultanate have been put on the quarantined agricultural area list.
The decision will prevent farmers from transferring palm trees and their saplings containing red palm weevils to healthy areas.
"Any person who contravenes this decision shall be punished by imprisonment for a period not exceeding three months and a fine not exceeding two thousand Omani rials, or one of these two penalties, and the fine shall be doubled in case of a repeated violation," the Ministry of Agricultural and fisheries stated.
Dr Fuad Al Sajwani, minister of agriculture and fisheries, issued the declaration for the agricultural quarantine areas in eight governorates.
Article 1 of the ministerial decision said: "Each of the following wilayats shall be declared as areas of agricultural quarantine until the cause has ceased and a decision is issued in this regard."
The quarantined areas in the eight governorates are Khasab and Dibba in Musandam; Madha, Buraimi, Mahdha in Al Buraimi; Sohar, Shinas, Liwa, Saham, Khabourah and Suwaiq in North Al Batinah; Barka and Rustaq in South Al Batinah; Sur and Jalan Bani Bu Hassan in Al Sharqiyah South; Sinaw and Al Qabil in Al Sharqiyah North; Ibri, Yanqul and Dhank in Al Dhahirah; and Bahla in Al Dakhliyah Governorate.
"The red palm weevil is one of the most dangerous insect pests in palm trees.
The Sultanate began its campaigns to eradicate this pest in1993 when the first red palm weevils were discovered in the state of Mahdah located on the border with the UAE.
It spread to other areas when the farmers transferred palm trees and their saplings containing red palm weevils to healthy areas," revealed Mahmoud Al Nabhani, director of the crop protection department at the ministry of agriculture and fisheries.
"This decision was the seventh declaration on agricultural quarantine areas, and it was issued because of the discovery of a new palm weevil focus area in the Wilayat of Suwaiq," Al Nabhani added.
When the ministry confirms a specific infection, the area is added to the control program and a new declaration is issued to add the area to the quarantine list.
"The programme of combating palm weevils includes a number of stages carried out by the field teams that conduct surveys, exploration and treatment, as well as raise awareness among farmers and involve them in control efforts," Al Nabhani explained.
"If the infection is in the initial stages, it is controlled through the spraying of pesticides, but if it is discovered in the later stages, after the discharge of odours from the trunk of the palm, the solution is the immediate cutting and burning of the palm.”
In 2013, the list included 19 states compared with 21 states in 2018.
"The spread of the pest depends on the level of awareness among the farmers and their support for the ministry’s efforts to fight the red palm weevil.
In 2014, the quarantine was cancelled in Samail state. In 2016, Saninah, and in 2017, the state of Bukhba were struck from the list of agricultural quarantine areas,” he revealed.
"The main problem we face is the difficulty of detecting palm weevils at an early stage.
The other problem is the population transfer of palm tree pups for planting at home and different areas without permission from the agricultural development centres, which evaluates whether the seedlings from the quarantined areas are healthy or infected," Mahmoud Al Nabhani pointed out.
Data show that in the past, the number of infected palms reached 19,000, the number of treated palm was 13,876, and 5,124 palms were removed.
The red palm weevil has the ability to fly to different areas."When the ministry announces an agricultural quarantine area, the control programme is intensified and the infected focal point is surrounded as soon as possible.
In addition, we install hormonal traps to attract the palm weevil insect from the farms surrounding the affected area."