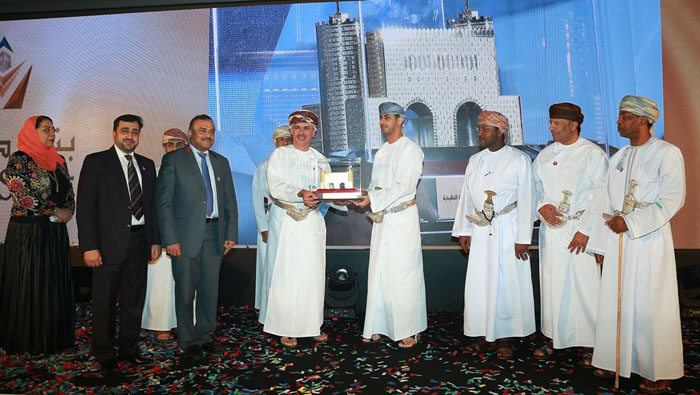 Muscat: As part of the annual finale of its popular Al Mumayaz Savings Scheme, Bank Sohar recently conducted its year-end grand draws under the auspicious of Sheikh Sa'ad bin Mohammed bin Said Al Mardhouf Al Sa'adi, Minister of Sports Affairs.
The event revealed the winners of the OMR100,000 Exclusive Draw; OMR20,000 Regional Draws (4 winners); and OMR10,000 Children’s Draw.
Representing Bank Sohar at the event, which was held at Sheraton Hotel on January 14 were Mohammed Mahfoodh Al Ardhi, chairman of the Board of Directors at Bank Sohar and Said Ahmed Safrar, Board Member at Bank Sohar. Alongside the management of the bank were Sasi Kumar, acting CEO – Bank Sohar, Munira Abdulnabi Macki, GM of HR and Corporate Support and Rajeev Arora, DGM & head of Retail Banking alongside executive management of the bank and other senior members of the management.
Marking this occasion, Sasi Kumar said, “As a bank driven by serving the aspirations and ambitions of its customers, we have been committed to developing products and services that offer innovative financial solutions. Over the years, we have built our dynamic position on the foundation of our customer-centric business model that transcends product research and development. Our commitment to customer satisfaction also includes every channel of communication, which facilitates active interaction and engagement with clients. As we progress ahead on fresh strategies for maintaining banking excellence, our valued customers will continue to be the bank’s top priority, spearheading new efficiencies and innovation.”
The evening initiated with a short video on the milestones of Bank Sohar in its course of 10 years of banking excellence. A welcome note followed the short video from Mohammed Mahfoodh Al Ardhi, chairman of the Board of Directors at Bank Sohar after which a short speech was given by the acting CEO. Shortly thereafter, another video was displayed to the audience highlighting the journey of the bank since its launch back in 2007.
In his speech, Kumar reflected on the bank’s various achievements through the year and milestones accomplished over its ten-year operation in the Sultanate. He reiterated the company’s commitment towards digitisation, product innovation and banking excellence in the pursuit of its goals. These, he emphasised, would dictate future strategies for network expansion and growth.
Immediately after, the event’s festivities unfolded in ceremonious style, befitting such a momentous occasion. Guests were treated to scintillating entertainment in the form of a psychedelic laser light show mesmerising audiences with dazzling displays launching Bank Sohar’s children’s account – Fayiz and Fayza. The year-end draws then took the limelight where the draws to reveal the winners of the OMR10,000 Minor Draws was conducted by some members of the audience. The celebratory festivities continued with a standout performance by an Omani band that set the stage for the announcement of the Regional and Exclusive year-end draws revealing the winners of OMR20,000 Regional Winner (4 winners) and OMR100,000 Exclusive Draw.
More dazzling entertainment of the laser light show was displayed before the trailblazing unveiling of the new Al Mumayaz Savings Scheme 2018 that will offer yet more prizes and categories for customers hence more chances to win marking the year 2018 as the year for the customer. The event concluded with a group photo session and the honouring of Sa'ad Al Sa'adi for being present during such an important occasion by Mohammed Mahfoodh Al Ardhi, chairman of Bank Sohar.
Rajeev Arora, DGM & head of Retail Banking, said, “The Al Mumayaz Savings Scheme has been one of the most successful products of Bank Sohar retail offerings till date, which attests to the bank’s incisive strategies when it comes to developing unique and differentiated products that meet the needs of its diverse customer demographic needs. The year 2017, in particular, has been very successful for the scheme in terms of the number of winners produced and the business potential it has uncovered, empowering customers with the means to make smart financial choices. Ever since its inception it has been changing lives and helping people to live out their dreams. The scheme echoes the bank’s commitment to developing the most lucrative and rewarding products for its customers that guarantee them the best in terms of quality service, reliability and innovation.”
The year-end draws witnessed M. A. M. from Salalah branch win OMR10,000 in the minor draw. In addition, the OMR20,000 regional draws conducted revealed one winner from branches in each of the Bank’s four operational regions where Saifuddin Abdulkadir Katabji from Al Azaiba branch won the prize allocated for Governorate of Muscat; Khamis Ali Al Shamsi from Sohar branch winning the prize allocated for Governorate of Al Batinah; Salma Al Mamari from Ibri branch winning the prize allocated for Governorate of Interiors; and A. A. A. from Salalah branch winning the prize allocated for ‘Salalah and Privilege Banking’. The grand year draw winner of OMR100,000 Exclusive Prize was Shakir Ghamtil from Privilege Banking branch.
“As we conclude the year’s final round of draws, I would like to congratulate not only all the winners that had the lucky chance in 2017 but all others also who participated in the success of the draws and would wish everyone the best of luck for the year ahead. This year the Al Mumayaz Savings Scheme has been even more dynamically designed and expects to surpass last year’s excitement and a maximum limit of 1,350 winners thereby increasing the number of winners across individual categories, creating more opportunities for customers to win exciting cash rewards with a greater focus on you. Complementing such products will be our first offering of 2018 - the children’s account ‘Fayiz&Fayza’, which is aimed at helping parents, secure their child’s future and encourage a culture of savings and financial planning among children at an early age,” added Rajeev Arora.