Two dead after protests in Pakistan over rape, murder of 7-year-old 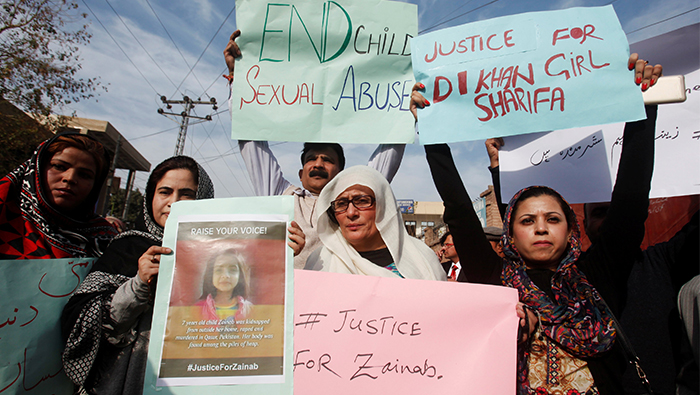 Lahore: An air of gloom, mixed with rage, hovers over Kasur, a small town situated around an hour's drive from Lahore in Pakistan, following the brutal discovery of the rape and murder of seven-year-old Zainab.
The barbarous murder of the girl, the 12th such case to occur within a two-kilometre radius of the city over the last year, ignited a wellspring of anger among the city's residents.
To add to it, police firing on protesters venting their anger over the incident left two people dead on Wednesday.
Speaking on a morning news show in Pakistan, Mudassar, the paternal uncle of the victim, said Zainab and his son, seven-year-old Usman, would go to their aunt's house daily to read the Quran.
He said that the two kids would often race to get there, and on that fateful evening Zainab went out first, followed by Usman, but wasn't at her aunt's house by the time Usman reached there.
Mudassar also stated that he doesn't recognise the man walking next to Zainab in the CCTV footage, saying that the potential suspect is forcibly holding her arm in the video.
The victim's parents claimed that police did not cooperate in finding their child after she went missing. "If the police would have acted immediately, the culprit would have been caught," said Zainab's father speaking to local media.
Zainab's initial postmortem report stated that she was strangled to death after being raped multiple times, but further forensic examination would be required.
While condoling with the family, the Chief Minister of the state of Punjab, Shehbaz Sharif, expressed his grief over tragic death of the innocent girl, assuring the bereaved family that the culprits involved in the murder will be brought to justice soon.
He also announced a PKR1 crore reward for whoever identified the culprit behind the heinous crime.
Pakistan's Chief Justice Saqib Nisar also took suo motu notice of the case later on Wednesday, ordering the Punjab Inspector General of Police to submit a report to the court within 24 hours.
Earlier that day, responding to the parents' appeal, Chief of Army Staff General Qamar Javed Bajwa issued directives for all-out support to the civil administration to arrest the criminals and bring them to exemplary justice.
With agency inputs.