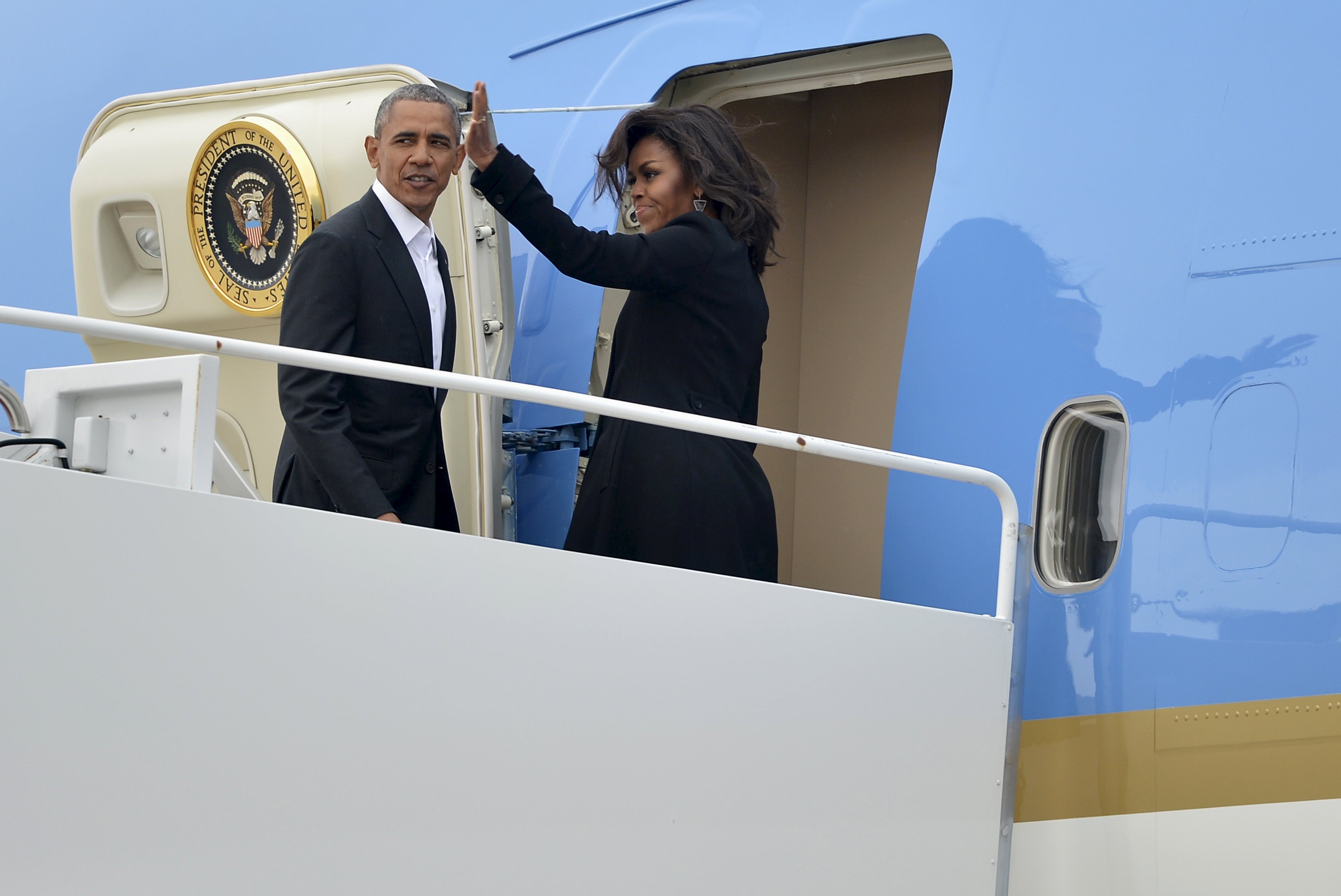 Havana: President Barack Obama embarked on Sunday on a historic trip to Cuba where a Communist government tprepared a red-carpet welcome.
Lifting off from Andrews Air Force Base outside Washington, Obama headed for Havana where the sight of Air Force One, America's iconic presidential jet, touching down on Cuban soil would have been unimaginable not long ago.
The three-day trip, the first by a US president in 88 years, is the culmination of a diplomatic opening announced by Obama and Cuban President Raul Castro in December 2014, ending a Cold War-era estrangement that began when the Cuban revolution ousted a pro-American government in 1959.
Obama, who abandoned a longtime US policy of trying to isolate Cuba, now wants to make his shift irreversible. But major obstacles remain to full normalisation of ties, and Obama's critics at home say the visit is premature.
Underscoring the ideological divide that persists between Washington and Havana, Cuban police, backed by hundreds of pro-government demonstrators, broke up the regular march of a leading dissident group, the Ladies in White, detaining about 50 people just hours before Obama was due to arrive.
Plainclothes police blanketed the capital with security while public works crews busily laid down asphalt in a city where drivers joke they must navigate "potholes with streets."
Welcome signs with images of Obama alongside Castro popped up in colonial Old Havana, where the president and his family will tour later on Sunday.
Since rapprochement, the two sides have restored diplomatic ties, signed commercial deals on telecommunications and scheduled airline service.
Major differences remain, notably the 54-year-old economic embargo of Cuba. Obama has asked Congress to rescind it but has been blocked by the Republican leadership.
Instead, he has used executive authority to loosen trade and travel restrictions to advance his outreach to Cuba, one of his top foreign policy priorities along with the Iran nuclear deal.
Cuba also complains about the continued occupation of the naval base at Guantanamo Bay, which Obama has said is not up for discussion, as well as US support for dissidents and anti-communist radio and TV programmes beamed into Cuba.
Speaking to reporters, foreign trade and foreign investment minister Rodrigo Malmierca Díaz said Obama's regulatory moves "go in the right direction." But he added: "We can't reach a normalisation of relations with the blockade still in effect and without resolving other themes of high importance."
Echoing the official line, Ileana Valdes, 55, a nurse, said: "There are many years of mistrust and we are not going to change our system, our values. Although one must highlight that there are no longer invasions."
The Americans in turn criticise one-party rule and repression of political opponents, an issue that aides said Obama would address publicly and privately.
The Ladies in White and their male supporters protested after a Palm Sunday service and were pulled into police vans after they sat down to block a street.
A similar scene plays out every Sunday, but this time it was more intense than usual due to the large crowd of government supporters. The government dismisses the dissidents, who are funded by US interests, as mercenaries seeking to destabilise the country.
Obama's critics at home accuse him of making too many concessions for too little in return from the Cuban government and of using his trip to take an unearned "victory lap." But Obama's more practical goal is to do everything he can to make sure his Cuba engagement cannot be rolled back, even if a Republican wins the White House in November's election.
Though general US tourism to the island is still officially banned under the embargo, a sign of changing times was the presence of groups of US travelers marveling at the vintage American cars rumbling through the streets.
Little progress on the main issues is expected when Obama and Castro meet on Monday or at a state dinner that evening. Instead, the highlights are likely to be Obama's speech on live Cuban television on Tuesday, when he will also meet dissidents and attend an exhibition baseball game.
Underlining Obama's political challenge at home, the office of U.S. Representative Ed Royce, Republican chairman of the House Foreign Affairs Committee, said the president's policy "has only served to prop up the communist Castro regime."
Obama is not scheduled to meet retired president Fidel Castro, 89, but officials reminded Cubans of their "historic leader" by publishing photos in the Juventud Rebelde newspaper of him seated in a wheelchair meeting with Venezuelan President Nicolas Maduro, who visited last week.
This highlighted conflicting sentiments within the ruling Communist Party about receiving a US president. At the same time, official media published a glowing biography of Obama and the government signed a hotel management deal with Starwood Hotels & Resorts Worldwide.
Starwood becomes the first US hotel company to sign a deal with Cuba since the 1959 revolution, announcing a multimillion-dollar investment to manage and market two properties in Havana and signing a letter of intent to operate a third.