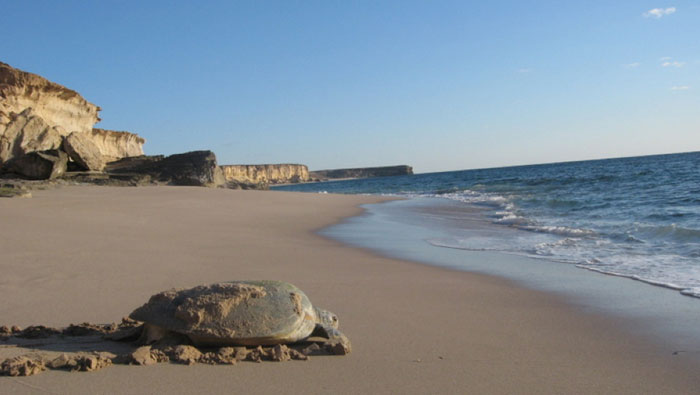 Muscat: Experts say the best way to overcome the threat to turtles in Oman is to conserve their nesting habitat.
This advice from marine biologists comes in the wake of a startling research report that indicated some 99 per cent of all local species of green sea turtles hatching near the Great Barrier Reef were female. This could lead to the extinction of the local population of turtles.
Global warming is believed to be the reason for the disproportionately high number of females. This is because warmer nests lead to the hatching of females, while cooler ones yield males.
Researchers said global warming had indeed affected the sex of turtle hatchlings worldwide. However, the temperatures that determine the sex of turtles varied with sub-populations and species.
Turtles hatching on the beaches of Oman might be affected by the global warming phenomenon, but there is no conclusive research to determine the intensity of this threat. Four species of turtles nest in Oman: loggerhead, hawksbill, green and olive ridley turtles. Leatherback turtles are occasionally seen at sea, but they don’t nest on the Sultanate’s shores.
“The rising temperatures are shifting the ratio of turtles from male to female. All sea turtles affected by the temperatures this way are subject to this change as beaches where they nest become warmer,” an official statement from Michael Jensen’s office at the National Oceanic and Atmospheric Administration stated. Jensen was part of the group that researched green turtles near the Great Barrier Reef.
Andrew Willson, a marine biologist from 5 Oceans Environmental Services (5OES), observed that conservation of the nesting habitat was the best way to protect turtles in Oman.
“Broad scale conservation of the nesting habitat is needed. By this I mean not putting all your eggs in one basket. It’s important to ensure a diverse array and spatial range of nesting habitats are properly protected, not just a select few. Beaches in different areas are subject to different weather and climatic conditions; they have different orientations, grain size, and sand colour - all of which can affect the temperature of the nest during incubation,” he noted.
Willson added that diverse beaches in Oman could affect the sex of green turtles. “In Oman, the nesting of green turtles is almost year-round in some areas and seasonal in others. Nests laid in Daymaniyats during the summer would be expected to be warmer than Ras Al Hadd during the khareef season. Green turtle nesting sites further south, including Masirah or in Dhofar, would be expected to be even cooler.
“This is just one reason why it’s important to maintain diversity amongst habitats.”
“Other scientists have suggested solutions of averting this problem by artificial cooling nests, and have suggested shading or sprinkling water over the top. Additional methods of interference could also include relocation of nests into controlled areas, however, even if this is carefully done would be impractical for populations of low density and dispersed over long stretches of coastline. Addressing climate change, protecting the nesting environment nature has already provided and monitoring of these areas is still the most common sense approach.”