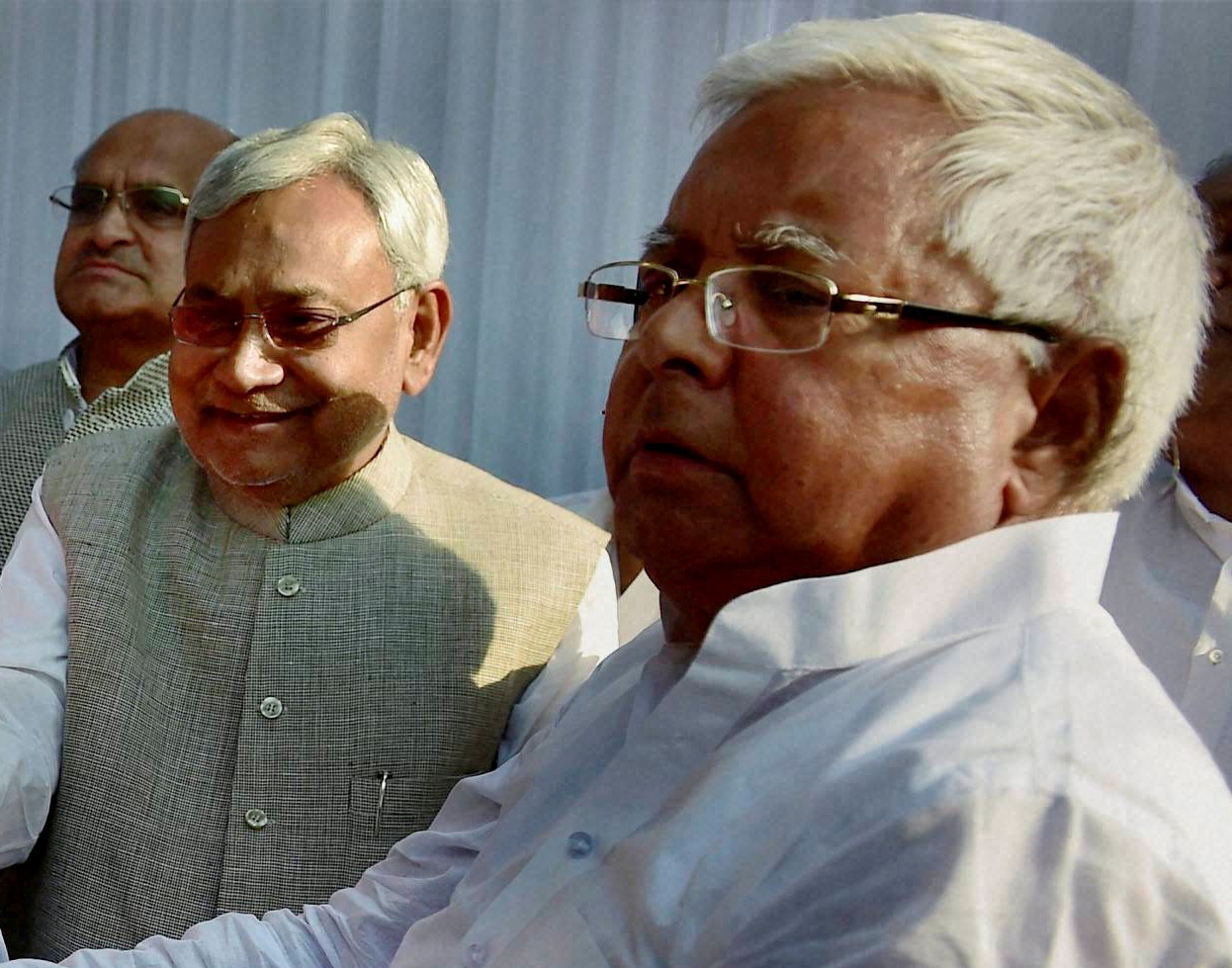 New Delhi: After a failed attempt at unification of the larger Janata Parivar, Janata Dal(United), Rashtriya Lok Dal, Jharkhand Vikas Morcha (Prajtantrik) and Samajwadi Janata Party look set to merge in Indian states of Bihar, Jharkhand and Uttar Pradesh.
Bihar Chief Minister Nitish Kumar, JD(U) President Sharad Yadav, RLD chief Ajit Singh, his son Jayant Chaudhary and poll strategist Prashant Kishor had a meeting at the residence of JD(U) general secretary K. C.Tyagi in the national capital on March 15 to work out the modalities, sources close to the development said.
While Nitish Kumar is in direct talks with with JVM(P) leader and Jharkhand's former chief minister Babulal Marandi, who had parted ways with BJP long back and formed his own outfit, Ajit Singh and K. C.Tyagi have held several rounds of discussions with Samajwadi Janata Party (Rashtriya) chief Kamal Morarka.
"The four parties can merge together very soon. Talks are in final stages. The date has not been decided but the new party may come into existence this month itself," a source said.
The JD(U), which rules Bihar in alliance with Lalu Prasad's RJD, has pockets of influence in the neighbouring Jharkhand.
RLD has been an important player in western Uttar Pradesh, while Samajwadi Janata Party (Rashtriya) formed by former prime minister Chandra Shekhar has little influence in the state after Mulayam Singh Yadav walked out of it and formed Samajwadi Party.
Janata Dal had 22 MPs in Uttar Pradesh in 1991, when Mulayam Singh Yadav and Chandra Shekhar parted ways with V. P. Singh and formed Samajwadi Janata Party.
Since then Janata Dal and later Janata Dal (United) have been on decline there. In 1996, the party headed by Sharad Yadav had 6 MLAs, which came down to two in 2002 Assembly polls.
Buoyed by the victory in Bihar, the party feels it can rejuvenate its moribund unit in Uttar Pradesh in alliance with RLD and other smaller parties.
JD(U) has also roped in Peace Party, which has some presence in eastern UP.
Peace Party Chief chief Sub Andrei had also met Nitish Kumar and JD(U) general secretary K. C. Tyagi to discuss the issue.
While JD(U) lacks a cadre base in Uttar Pradesh and can hope to gain from alliance with regional parties like RLD and Peace Party, Nitish Kumar's persona could help these parties in cementing their vote base.
The RLD, which in the past called the shots in western UP with its Jat-Muslim combination, is a considerably weakened political entity in the region following a rupture in its support base after the Muzaffarnagar riots in 2013.
RLD hopes Nitish Kumar, with his pro-Muslim image, could help undo some of the damage.
JD(U) leaders had also campaigned for RLD candidates in the bypoll to three assembly seats in Uttar Pradesh in February.
The two major parties in Uttar Pradesh -- Bahujan Samaj Party and Samajwadi Party -- have already ruled out the possibility of alliance with any party.
The JD(U)-RLD combine is keen on having the Congress in the anti-BJP front for UP polls.
JD(U) was also keen on forging an alliance with Congress in Assam, but the latter's state unit was not inclined.
Six splinter groups of Janata Parivar had last year made an attempt at merger and even announced Samajwadi Party chief Mulayam Singh Yadav as their leader.
The parties were H. D.Deve Gowda-led Janata Dal-Secular, JD(U), Lalu Prasad's RJD, Om Prakash Chautala's Indian National Lok Dal, Kamal Morarka-led Samajwadi Janata Party and the SP.
However, not only the plan failed to take off, Mulayam Singh Yadav's party even fielded candidates against those of the grand alliance of JD(U)-RJD-Congress in Bihar assembly polls last year.
"If not Janata Parivar, at least let the Lok Dal Parivar come together," said a senior leader of JD(U) on fresh efforts for merger.
"Some final points need to be sorted out about the flag, the election symbol and the new constitution as something from all the four parties will have to be incorporated," a source said.
JD(U) is already looking for a new election symbol. It is of the view that its existing 'arrow' election symbol is "confusing" voters.
JD(U)'s symbol arrow bears resemblance to the bow and arrow symbol of Jharkhand Mukti Morcha and Shiv Sena.
The party's bid to seek a new symbol and merge with other parties comes ahead of assembly election scheduled in five states -- Assam, Tamil Nadu, Puducherry, West Bengal and Kerala.