Want to see a pride of lions in Oman? 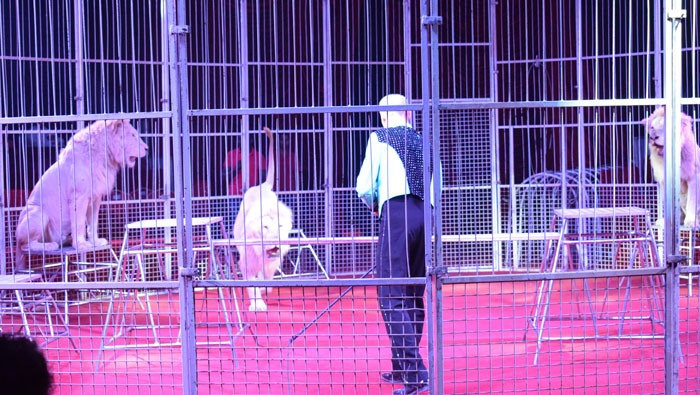 Muscat: A visiting circus with a pride of lions, all of them white, has arrived in Oman

The Latino Circus has arrived in Muscat to showcase breathtaking stunts and spectacular performances. The show - under a traditional big top tent - includes four white lions, clowns, a dog show, a globe of death and traditional trapeze acts.
**media[800906]**
“People of Oman haven’t seen such a circus before,” said Souheil Obeid, Chairman of Eventoh Exhibition Management, the company which is responsible for bringing the circus to Oman.

He said the circus will be offering a family-friendly experience until January 20, 2018.

The white lions are, of course stealing the show.

“They just don’t eat from the trainer’s hand but he puts his head inside the lion's mouth, which the Muscat residents haven’t seen before,” said Obeid.

The toughest part is to transport these big lions from one place to another.

Souheil Obeid said: “There are some rules of dos and don’ts governing safe transportation of wild animals between one country and another.”
**media[800907]**
According to the rules, the animals must be moved in air-conditioned units and the animals should be tagged before transport. “While only adults and sub-adults should be transported, pregnant, sick, weak and injured animals are not allowed to be moved,” he said.

The four big cats - the white lions - are the show-stoppers under the big tent.