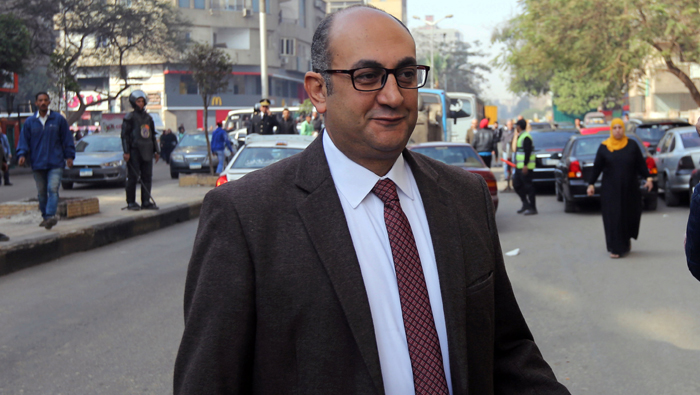 Cairo: An Egyptian court on Wednesday postponed its verdict in a case against rights lawyer and presidential hopeful Khaled Ali, judicial sources said, leaving uncertainty over whether he will be allowed to run in a forthcoming election.
President Abdel Fattah Al Sisi is widely expected to seek a second term in the presidential vote early this year, but has not yet announced his candidacy. Ali said in November he intended to run against former military commander Sisi, who led the ousting of Muslim Brotherhood President Mohamed Morsi in 2013 before taking office a year later.
But a three month prison sentence passed in September for public indecency over an alleged rude hand gesture he made outside a courthouse last year might yet disqualify Ali. Ali has appealed, denying the charges which he says are politically motivated.
Wednesday's hearing at an appeals court delayed the final decision until March 7. If the guilty verdict is upheld he will not be allowed to run, even if he is not jailed. If the election takes place before March 7, however, Ali will be allowed to run, he and another lawyer said.
"Nothing stands in the way of my running," Ali told Reuters by phone. "The (September) verdict ... has no value until it becomes final through an appeals court," he said. Egypt will announce a date for the 2018 vote next week. Ali, a socialist, ran in the 2012 election coming seventh. Mursi won that vote as Egypt's first freely elected president. A judicial source said the appeals court had postponed its verdict while footage was examined to determine whether Ali made the alleged rude sign.
Ali gained prominence in January last year when he won a case that nullified a government transfer of two Red Sea islands to Saudi Arabia, a deal that had prompted mass protests. Sisi's critics say his popularity has been dimmed by austerity reforms, security problems and a crackdown on dissidents.
His allies dismiss accusations of rights abuses, saying his measures are needed for security in the face of an Islamist insurgency in the North Sinai region that has expanded to include civilian targets.