'Eateries not adhering to Indian GST norms to face action' 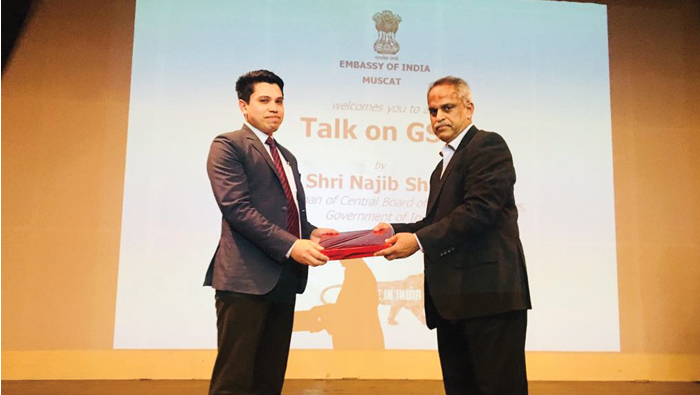 Muscat: A former advisor to the Goods and Services Tax (GST) council delivered a talk to expats on the new tax regime at the Indian embassy on Tuesday.
The talk was delivered by Najeeb Shah, former chairman of the Central Board of Excise and Customs (CBEC). It was held in association with the Institute of Chartered Accountants of India (ICAI) Muscat Chapter.
A significant part of the large amount of remittances that Indian expats in Oman send home are spent by their relatives, who are consumers in the Indian market.
Of note, restaurants in India that are not reducing their menu prices following rate cuts under the GST regime will not be allowed to do so for long, said Najeeb Shah.
The CBEC was at the helm of driving this change in the tax regime, and as a special invitee to the GST Council, Shah was heavily involved.
The Central government slashed GST rates for restaurants from 18 per cent to 5 per cent on November 15. However, some restaurants, including Quick Service Restaurants (QSRs), continued to charge the same prices after the rate cut, ensuring that the benefits were not passed on to consumers.
Shah said that non-compliance of restaurants was not acceptable, adding that the authorities would crack down on such practices. “Many restaurants are doing this. It simply doesn’t pass muster,” he stated. The former advisor to the GST council pointed out that the new tax regime was the boldest economic reform in recent times. He praised the Indian government for its hard work in reaching a consensus with all the states of the Union.
“People like myself told the government that governments of other countries who had switched to GST were voted out for power. Politically, it was a very bold move,” Shah said. “Moreover, we have done away with tax holidays,” he added. The former IAS officer hailed the GST council as an extraordinary body that helped solve issues.
He praised Finance Minister Arun Jaitley and members of the council for their hard work. “The council literally sat down from 10 am to 10 pm and ironed out its differences. We now have a consensus, which is the most important thing,” he said.
Shah defended the central government over its four tax slabs.
“A finance minister can’t say I have the same GST rate for slippers, wheat and air conditioners. It’s not possible,” he stressed.
However, he agreed that, gradually, commodities under the lowest and highest tax slabs should be done away with.
“GST rates for gold had been 5 per cent. The finance minister told me that gold is a poor man’s commodity, as Indian weddings are incomplete without gold. So, the government created a special tax rate of 3 per cent for gold,” Shah noted.
However, the former advisor to the GST council admitted that there had been difficulties in the implementation of GST, including technological readiness.