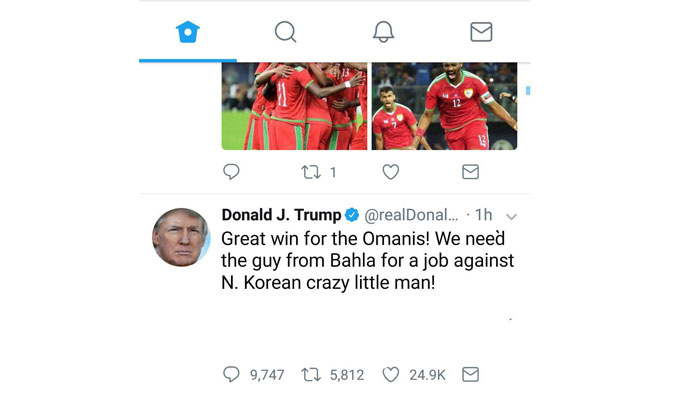 Muscat: Did United States President Donald J. Trump tweet on Oman’s 1-0 win over Bahrain in the first semi-final in Kuwait’s Jaber International Stadium, on Tuesday?
No!
But, a photoshopped fake tweet is being circulated in social media claiming that Trump congratulated the Oman team and wants the footballer from Bahla to ‘do a job’ against North Korean President Kim Jong Un.
The fake tweet reads that “Great win for Omanis!. Need the guy from Bahla to do a job against N. Korean crazy little man”.
There are many websites like Tweeterino, which will generate fake Trump tweets instantly.
On Tuesday, Trump had taunted North Korean leader Kim Jong Un, warning Kim about US nuclear capabilities as tensions worsen between the two nations.
"North Korean Leader Kim Jong Un just stated that the 'Nuclear Button is on his desk at all times.' Will someone from his depleted and food starved regime please inform him that I too have a Nuclear Button, but it is a much bigger & more powerful one than his, and my Button works!" Trump tweeted.
On Monday, Kim in his annual New Year's Day address that "The entire mainland of the US is within the range of our nuclear weapons and the nuclear button is always on the desk of my office. They should accurately be aware that this is not a threat but a reality."
In the address, Kim also expressed a desire for a peaceful resolution with South Korea, a break from the aggressive language he used to threaten the US.
Trump, as part of his Tuesday morning tweetstorm, said the potentially warm gesture to South Korea from Kim is "perhaps" good news, "perhaps not," and referred to "sanctions and 'other' pressures" on North Korea.
US president Donald Trump has had a complicated relationship with American media in his nearly one year of presidency. Over the last year, the POTUS has accused several news networks and publications of "distorting" facts about him and his presidency. To voice his contempt for what he calls "fake media".
Trump announced on late Tuesday that he would give out awards for the "most dishonest and corrupt media".