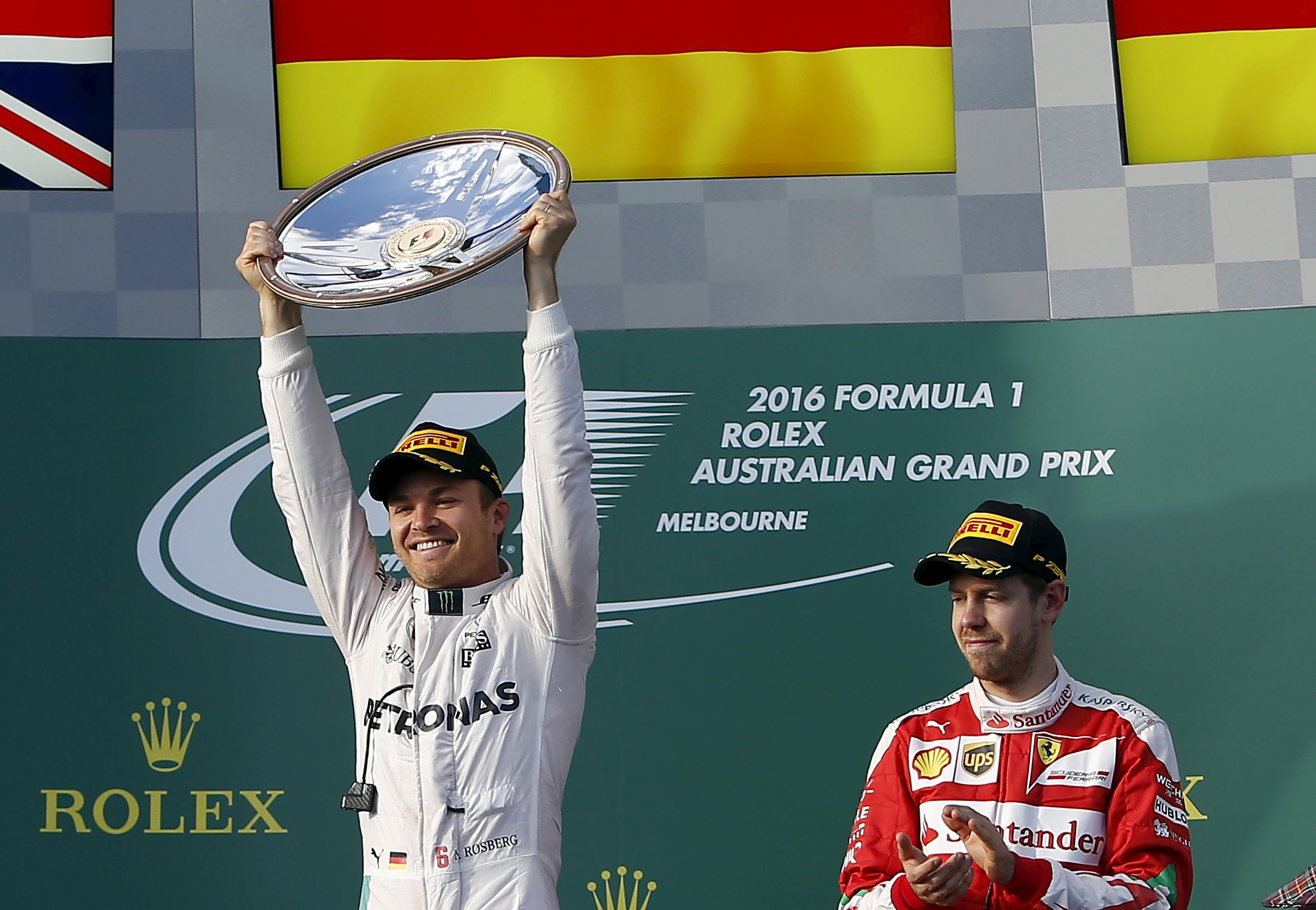 Melbourne: Nico Rosberg won a dramatic Australian Grand Prix on Sunday after a bungled tyre strategy dashed Sebastian Vettel's chances of a season-opening triumph and Fernando Alonso survived a spectacular crash that left his McLaren wrecked.
Rosberg's 15th Formula One victory was also his fourth in succession after the German Mercedes driver won the final three races of last season.
Pole-sitter Lewis Hamilton battled back to secure a Mercedes one-two after the defending world champion recovered from a chaotic start that pushed him back to sixth at the first turn to finish eight seconds behind his team mate.
Four-times world champion Vettel came third for Ferrari after leading for much of the race, but the German's victory hopes faded with an aggressive tyre strategy that fell flat after the race was halted due to Alonso's crash.
"The strategy was crucial today, so I'm really thankful the team did a good job on that," ecstatic German Rosberg told reporters.
"The car's just been unreal today... We've got to keep an eye on the red guys (Ferrari), they are very close as you saw today."
Ferrari enjoyed a brilliant start, with Vettel able to carve through the front-row occupying Mercedes duo on the run to the first turn.
His Finnish team mate Kimi Raikkonen also got off to a flyer and he darted up the side to claim second place as Rosberg's rear left tyre made contact with Hamilton's front wing.
Compound issues
Vettel appeared poised for an unlikely win but the race turned on its head when Alonso crashed into Haas driver Esteban Gutierrez at high speed going into turn three of the 18th lap.
The Spaniard's car careened into a barrier and was smashed to pieces before it flipped, rolled and flew end-over-end into another barrier.
Alonso walked away from the wreckage but the red flag came out to halt the race for around 10 minutes as track staff swept away debris and repaired the barriers.
During the break, Mercedes opted to run both cars on medium compound tyres and rode them to the finish, while Ferrari took the more aggressive route, sticking with their super-softs, which were quicker but ultimately required another stop.
The mistake proved costly and was compounded when Vettel's next tyre change was botched, while Raikkonen's race was over on lap 23 when an engine failure forced him out and he reached the pits with flames shooting out of the top of his car.
"Obviously the red flag didn't help us," Vettel said.
"We went for the aggressive route but maybe with hindsight we may have gone with something else," the German added of the tyre strategy.
New team Haas, the first American-owned F1 outfit to race in 30 years, celebrated points on debut, with Frenchman Romain Grosjean finishing sixth behind Red Bull's fourth-placed Daniel Ricciardo and Felipe Massa in a Williams.
Force India's Nico Hulkenberg, Williams' Valtteri Bottas, and the Toro Rosso duo of Carlos Sainz and Max Verstappen completed the top 10, with Renault rookie Jolyon Palmer narrowly missing out on a point on debut.
Red Bull's Daniil Kvyat was among six cars that failed to finish including Manor Racing's Indonesian rookie Rio Haryanto.
Haryanto's team mate and fellow debutant Pascal Wehrlein was last of the 16 finishers.