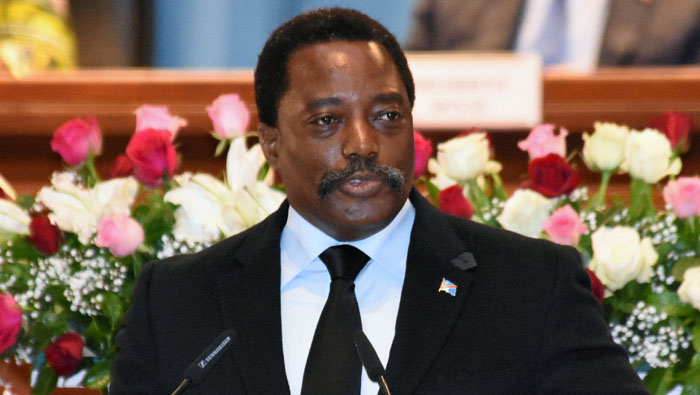 Kinhasa: Congolese security forces killed at least four people on Sunday during protests against President Joseph Kabila's refusal to step down from office, according to the police and rights groups.
Three people were killed in altercations with security forces in the capital, Kinshasa, police spokesman Pierrot Mwanamputu said. Rights groups said at least two people in Kinshasa and one in the central city of Kananga were gunned down while protesting.
Catholic activists had called for protests after Sunday mass, one year after Kabila committed to holding an election to choose his successor by the end of 2017 - an election that has now been delayed until December 2018.
The delay has fuelled suspicions Kabila will try to remove constitutional term limits that forbid him from running again, as presidents in neighbouring countries have done. That in turn has raised fears the country will slide back into the kind of civil war that killed millions at the turn of the century.
Georges Kapiamba, a human rights activist, said he had confirmed with his network of observers that security forces killed at least two people in Kinshasa and one in Kananga.
Earlier in the day, Human Rights Watch's Central Africa director, Ida Sawyer, said security forces shot dead two men outside a church in Kinshasa, according to the organisation's researchers on the ground.
Anaclet Tshimbalanga, a rights activist in central Congo's Kasai region, confirmed that security forces had shot dead a demonstrator in Kananga. Leonie Kandolo, a spokeswoman for the march organisers, said about 10 people had died.
Mwanamputu told Reuters that one of the deaths occurred when security forces in Kinshasa were attacked by young men, some of them carrying firearms and bladed weapons. He said the other two deaths were being investigated.
Kapiamba said at least 129 people were arrested in cities across the country, including several priests, and dozens were injured. Mwanamputu confirmed that arrests were made but did not say how many.
At the Paroisse Saint Michel in Kinshasa's Bandalungwa district, security forces fired teargas into the church, creating panic, opposition leader Vital Kamerhe, who was present at the mass, told Reuters.
The police had banned the demonstrations and said that all gatherings of more than five people would be dispersed to ensure public order. Across Kinshasa, police and soldiers searched vehicles and checked passengers' identifications. Authorities also on Saturday ordered all internet and SMS services cut until further notice.
At the Notre Dame du Congo cathedral in Kinshasa's Lingwala district, where opposition leader Felix Tshisekedi was attending mass, dozens of police and soldiers blocked the path of more than 100 opposition supporters as they prepared to try to march.
Tshisekedi, however, who had backed the activists' call to march, left the church in a vehicle, spurring angry shouts from the crowd, which said he was abandoning them.
At another church in the working-class district of Barumbu, a few dozen police officers used teargas and stun grenades against some 300 churchgoers, who waved bibles and sang religious songs as they tried to march, a Reuters witness said.
Some 40 per cent of Congo's population is Roman Catholic and the Church enjoys rare credibility with the public, even though its leadership has not formally backed the protests.