Parents fume over fee hike at Indian schools in Oman 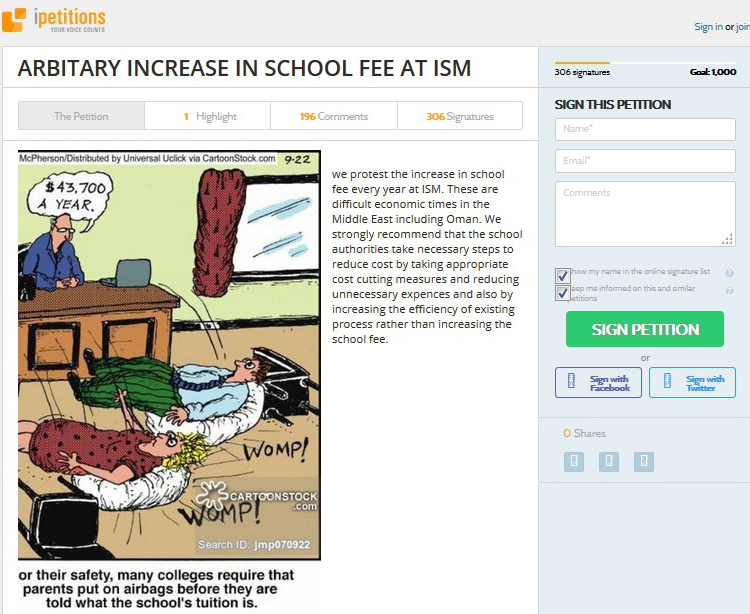 Muscat: Parents expressed shock and anger when they learnt that tuition fees for most of the Indian schools will be raised from April.
The Indian School Board’s green signal to raise fees for most of the schools has met with disapproval from most parents, who said they are already facing a cash crunch as living costs continue to rise.
Most parents that Times of Oman (TOO) spoke to said the latest increase is unfair and does not take into account the stress on finances. “It’s a big blow to us. When the government is in an austerity mode, we are being denied increment, bonuses and many other perks. Everyone is running on a shoestring budget. At this time, hiking the fee is a big blow to us,” Manoj Balakrishnan Nair, whose child studies at ISM, said.
Parents will now have to pay OMR48 extra annually as per the new fee structure. Another parent said schools in Oman are run like businesses, and the main agenda is profit, not education. “Can anyone tell me where will be the OMR36,000 go every month, which the ISM will earn from April,” asked Sushma, whose son studies in junior classes at ISM.
**media[361211]**
Another said the school keeps increasing the fees on some pretext or the other every year. “The schools here need to have some kind of cap and their funds needs to be monitored,” said one of the parents. When contacted, Wilson George, chairman, Indian schools in the Sultanate, said the financial management of the school is a challenge, which is managed by the individual school management.
“The Board has a role in reviewing and approving the budget (if no abnormalities are found). The Board always take a parent friendly approach, and does not announce any fee hike school wide, however, the Board allows a one rial/per month increase to take care of yearly increments in staff costs etc. Most of the community schools this year have announced an OMR1 increase, except the Indian school Seeb with OMR2 and Indian School Muscat with OMR4. The parents can get more details from the individual schools, if they wish, to understand the challenges in which this increases are made,” he told TOO.
A few said they have started on online petition campaign against the fee hike. During the last academic year, the fee was increased by OMR1.5.
There are around 9,000 children studying from KG I until Class XII at ISM and the total number of students in all Indian schools stands at a staggering 44,500.