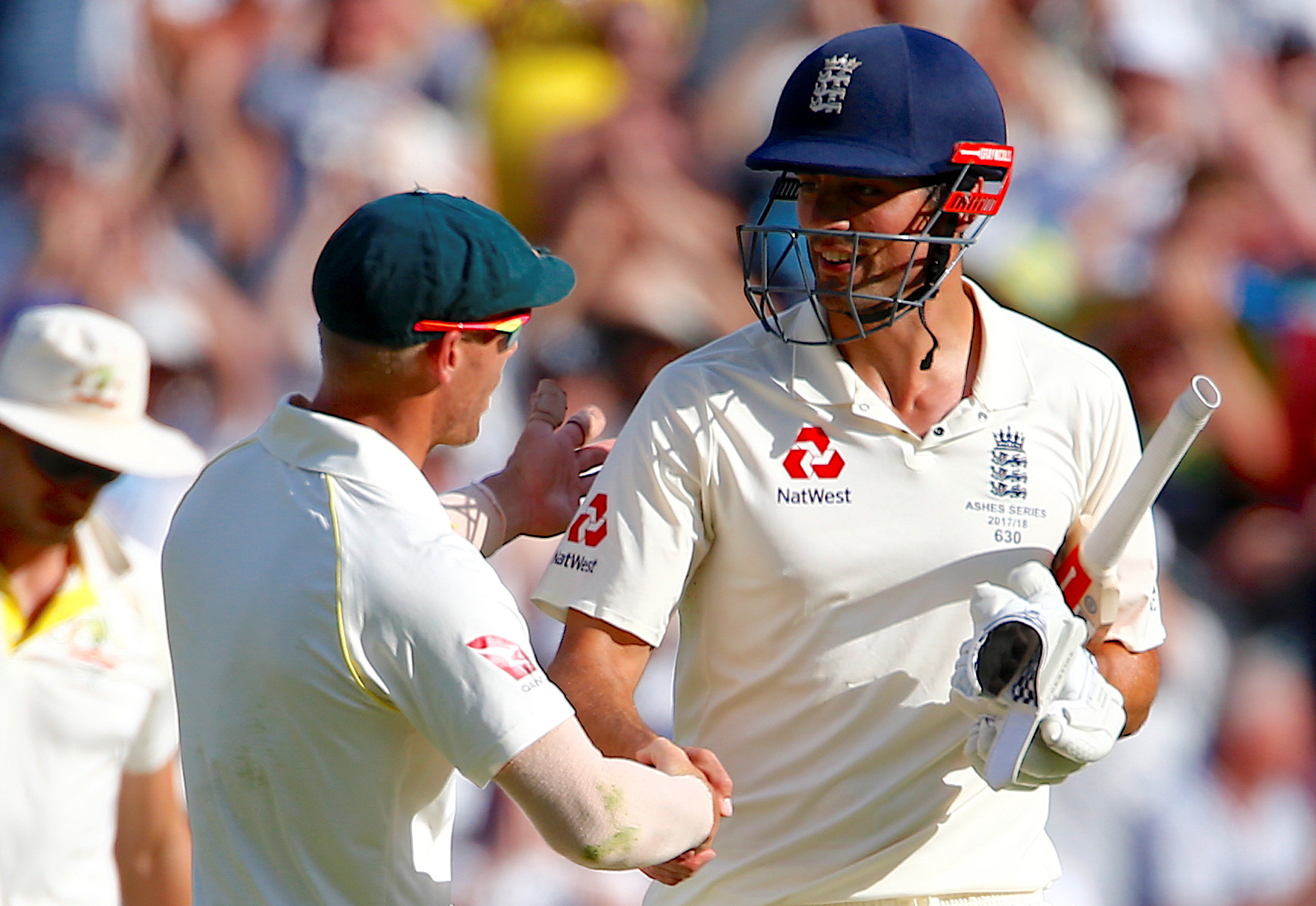 Melbourne: Alastair Cook completed a stirring century in a stellar return to form as England savoured a rare day of domination in the fourth Ashes Test against Australia on Wednesday.
Cook raised his 32nd Test ton with a pull-shot to the fence in the final over before stumps, and strode off the ground unbeaten on 104, having pushed England to 192 for two on day two at a sweltering Melbourne Cricket Ground (MCG).
His successor as captain, Joe Root, was 49 not out, the pair having helped reduce Australia's lead to 135 runs.
English cheer has been in short supply this series after Australia took back the urn with victory in Perth but Wednesday's fightback thrilled sun-baked Britons in the raucous crowd of 67,882.
Stuart Broad, another Englishman under scrutiny after playing a negligible part in the series, captured four for 51 as Australia's day one resistance melted in the morning heat.
The hosts started the day in a position of strength at 244 for three but were bowled out for 327, losing their last seven wickets for 67 runs.
"Bowling Australia out for 320-odd, we’re absolutely delighted," Broad told reporters.
"We’re in a fantastic position in this Test match.
"We want that scorebread pressure going into getting those next 10 wickets."
After labouring on a slow and flat pitch on day one, England's bowlers were transformed in the morning, with debutant paceman Tom Curran proving the unlikely catalyst.
The 22-year-old Surrey seamer bowled Steve Smith for 76 with the second ball of his first spell, having the skipper drag a wider, short delivery onto his stumps.
It not only secured Curran his first Test wicket but ended Smith's unbeaten reign at the MCG since his last dismissal in the Boxing Day Test against India in 2014.
It was also a huge relief for Curran, who had opener David Warner caught on 99 on day one but missed out on the wicket for over-stepping his mark.
Acrobatic dismissal
Smith was one of three Australian batsmen out chopping onto the stumps, with all-rounder Mitchell Marsh (9) and wicketkeeper Tim Paine (24) falling in the same fashion.
The home captain finished a disappointing day by conceding 11 runs in the final over with his part-time leg-spin, allowing Cook his century and England a rousing finish.
"If we can come tomorrow morning ... and hopefully challenge their defence a lot more than we did today, then hopefully we can get a couple of breakthroughs and see where we get to," Australian spinner Nathan Lyon told reporters.
Shaun Marsh dug in to raise his third half-century of the series before being trapped leg before by Broad for 61.
James Anderson bowled Paine and dismissed Lyon lbw for a duck to finish with three for 61.
Starting England's response after lunch, Cook and Mark Stoneman fended off Australia's opening pace salvo before Lyon intervened with a brilliant caught and bowled.
The off-spinner coaxed a leading edge from Stoneman (15) and leaped high to pull down a one-handed catch, reviving memories of his acrobatic dismissal of Moeen Ali during the second test at Adelaide Oval.
Vince (17) was given out lbw when paceman Josh Hazlewood sent a full, straight ball thudding into his pads.
He neglected to review the decision and would have regretted it later, with the 'snicko' technology showing he had nicked the ball with his bat.
Cook and Root then combined for a 112-run partnership to give England hope of grabbing a substantial first-innings lead.
Australia's task was made more difficult with Pat Cummins hampered by a stomach ailment.
He battled through 11 overs but Lyon said the sickly seamer would see a doctor in the evening to restore fluids and hopefully be ready to play on day three.
Scoreboard
Australia 1st innings
C. Bancroft lbw Woakes 26
D. Warner c Bairstow b Anderson 103
U. Khawaja c Bairstow b Broad 17
S. Smith b Curran 76
S. Marsh lbw Broad 61
M. Marsh b Woakes 9
T. Paine b Anderson 24
P. Cummins c Cook b Broad 4
J. Bird lbw Broad 4
J. Hazlewood (not out) 1
N. Lyon lbw Anderson 0
Extras (lb-1, nb-1) 2
Total (all out, 119 overs) 327
Fall of wickets: 1-122, 2-135, 3-160, 4-260, 5-278, 6-314, 7-318, 8-325, 9-326.
Bowling: J. Anderson 29-11-61-3; S. Broad 28-10-51-4; C. Woakes 22-4- 72-2; M. Ali 12-0-57-0; T. Curran 21-5-65-1 (nb-1); D. Malan 7-1-20-0. England 1st innings
A. Cook (not out) 104
M. Stoneman c&b Lyon 15
J. Vince lbw Hazlewood 17
J. Root (not out) 49
Extras (b-4, nb-3) 7
Total (2 wkts, 57 overs) 192
Fall of wickets: 1-35, 2-80.
To bat: D. Malan, J. Bairstow, M. Ali, C. Woakes, T. Curran, S. Broad, J. Anderson
Bowling: J. Hazlewood 12-2-39-1; J. Bird 12-2-38-0 (nb-3); N. Lyon 17-2-44-1; P. Cummins 11-0-39-0; M. Marsh 4-0-17-0; S. Smith 1-0-11-0.
Umpire: Kumar Dharmasena, Sundaram Ravi
TV umpire: Joel Wilson
Match referee: Ranjan Madugalle