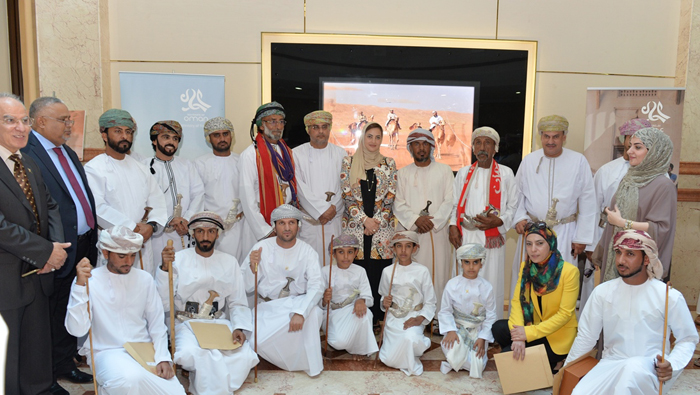 Muscat: The second edition of the camel trek, ‘Hidda Al Sahra’, concluded yesterday after it reached the Ministry of Tourism (MoT) headquarters in Muscat.
The trek involved crossing the Wilayat of Bidiya in Ash Sharqiyah Sands.
The closing ceremony, hosted by the ministry under the auspices of Maitha Saif Majid Al Mahrouqi, Undersecretary of MoT, witnessed a welcome reception for the Omani travellers and a ceremony to honour the participants and sponsors. An exhibition of photographs related to the event was also opened on the occasion.
Ahmed Harib Al Mahrouqi, one of the Omani travellers partaking in the trek, remarked that the final phase of the trek kicked off from Al Khoud on Monday, December 25, and reached the ministries’ district in Al Khuwair on December 26, in coordination with the Royal Oman Police.
Mahrouqi, a veteran of several dessert crossing trips to the Empty Quarter and Sharqiyah Sands, said, “A nomad-style tent was installed next to the MoT building complex to celebrate the end of the historic trek. It was open to visitors, which provided an opportunity for them to get to know the life of nomads in the desert, take pictures, have coffee and chat with the camel trek team, as well as receive free brochures and booklets on the subject.”
“We spent the night in the tent and then attended the closing ceremony, he explained. We took the camels on a trek around the ministry’s building, passing on our way the Ministry of Environment and Climate Affairs, and arrived at the ministry’s main gate, where the undersecretary received us.
Among the many activities, the event showcased the ‘Hidda Al Sahra’ exhibition for Omani photographer Faisal Khamis Al Oufi, which documents the trek’s memorable moments.
The second edition of the trek was conducted as part of the winter tourism season in Oman, which sees an increasing number of camping, trekking, desert-crossing and hiking activities.
The trek witnessed the participation of 16 representatives from Be’ah, who aimed to raise awareness about the importance of preserving the desert environment.
Additionally, the event targeted visitors, tourists and the local community, with the larger objective of educating them on the methods to preserve the desert’s natural environment and ensure its sustainability.
The trek, which has gained popularity among visitors and tourists, since it was first initiated, has seen a growing interest, with many joining the team to experience the trek with nature for company.
The route of the second edition covered 50 kilometres; starting from the Arish Camp, it passed through the Sama Al-Wasil Camp, concluding at the Desert Nights Camp.
This edition of the trek saw the participation of four of the Sultanate’s most famous Omani travellers: Ahmed bin Harib Al Mahrouqi, Amer Al Wahibi, Hamoud Al Nahdi and Mohammed Al Zadjali, along with 12 other team members.
The trek was organised by the Ministry of Tourism, Alam Al Hejn, and Sultan Qaboos University. It was sponsored by Al Ghalbi International for Engineering and Contracting, Be’ah, Oman LNG, Al Duqm Travels and Tourism, Al Roya newspaper, Wijihat, Desert Nights Camp, Sama-Wasil Camp and Desert Explorer company.