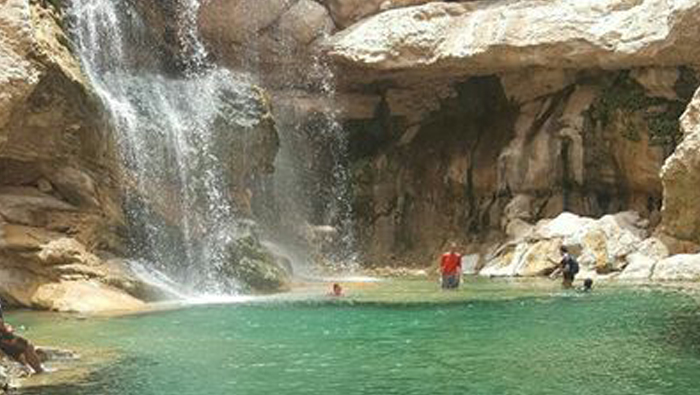 Quriyat: Wadi Al Arbiyeen in Quriyat is one of the most famous valleys in the Governorate of Muscat, known for the beauty and depth of its nature.
The valley passes through the Al Hajar Al Aswad mountain terrain, where water flows through valleys, Aflaj (an ancient system to irrigate agricultural crops), water springs and waterfalls to form a tourist and economic landmark. The wadi contributes to the prosperity of the agricultural life in the village because of the abundance of pure water here. The village was called “Wadi Al Arbiyeen “ in relation to the large number of valleys descending on it.
The village is located in the eastern part of the Wilayat of Quriyat on the road linking Quriyat with the Wilayat of Sur. It is located some 17 kilometres from the main road. It is distinguished by its unique beauty and its mountainous terrain that leads to Wadi Al Arbiyeen. The ponds, which have created beautiful formations throughout the village, attract tourists to the village. Tourists take advantage of these by camping on both sides of the pond while engaging in activities such as swimming, diving and barbecuing, among others.
The village of Wadi Al Arbiyeen is made up of several small villages (Al Suweih, Al Batha, Hail Al Qawasim, Al Sulaifi, Al Far’, Al Mughrah), which depend on agriculture and herding of sheep for their economic sustenance. These villages have preserved their traditional fashion and lifestyle, with the women engaged in textile manufacturing to make traditional clothing; frond industries; in addition to the manufacturing of some household items, which are made with pure natural materials. Residents of the village have played a significant role in the construction of Aflaj since ancient times. The water flows through the Aflaj in several directions, forming a number of beautiful waterfalls. There are eight Aflaj in the village, four of them in Al Suweih Village, in addition to a number of Aflaj in the village of Hail Al Qawasim.
The village of Al Mughararah has an old well, which is still used to this day. The residents of Wadi Al Arbiyeen have preserved their traditional irrigation method that depends on the Aflaj.
The village also has many springs and waterfalls.
Wadi Al Arbiyeen is famous for palm, mango, banana, fig, lemon, bitter orange and sweet potato, as well as tomato, eggplant, barney, Abu Naranja, Khasab and Khnezi.
The mountains of Wadi Al Arbiyeen attract those who like mountaineering and other adventure sports. Mountaineering teams flock to the village to practise the sport in moderate weather throughout the year and enjoy spectacular views. They come to the village continuously to watch the waterfalls, some of which are difficult to reach.
Said bin Juma al-Ghuzaili, member of the Majlis A’Shura and a representative of the Wilayat of Quriyat, said to Oman News Agency (ONA): “With the government’s increasing interest in tourism, as one of the pillars of the Omani economy in its current plans, the Wilayat of Quriyat has become one of the most important tourist destinations, which is favoured by tourists because of the diversity of its nature — having mountains, sea and agricultural lands. The Wilayat contains 117 small villages that vary in nature and are distinguished by its beauty.”