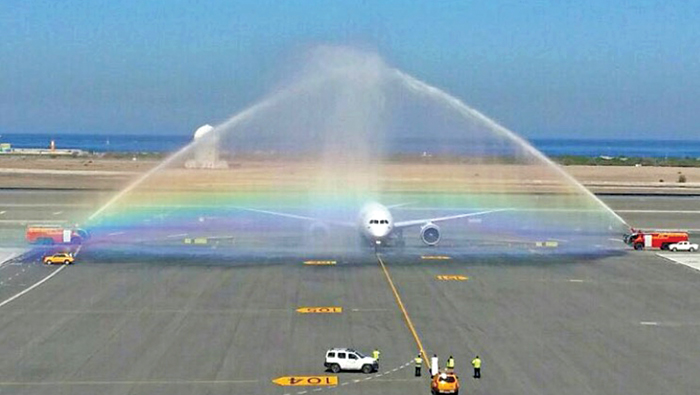 Muscat: A water cannon salute casts a rainbow over flight WY2001, the first trial flight at Oman’s new airport, destined to be a jewel in the crown of the Sultanate’s plans for a bright future.
Check out more photos here
The flight took off at 11:15am yesterday and was deemed a total success. It carried the hopes of a nation determined to diversify.
The state-of-the-art international airport is inching its way to opening its doors, with public trials on-going and final checks underway.
Oman wants to move away from its dependence on oil, and the new airport is essential to drive the tourism market the country wants to exploit. Muscat International Airport is expected to be a global top 20 airport within the next decade.
For those on the ground, it was a big day, timed to commemorate the day His Majesty Sultan Qaboos bin Said announced the original airport’s opening.
Operated by the Sultanate’s national carrier Oman Air and overseen by Oman Airports Management Company (OAMC), which supervises the development and management of all of the nation’s airports, Oman Air flight WY2001 became the first passenger aircraft to take off from the new airport as part of the trials being organised to test airport readiness ahead of its full opening, which is scheduled for April of next year.
Momentous occasion
December 23 will remain a momentous occasion for two reasons: that take off aside, the airport’s passenger terminal was also inaugurated by Dr. Mohammed bin Nasser Al Zaabi, CEO of Oman’s Public Authority for Civil Aviation (PACA) and Captain Hafez Al Khattari, the pilot of WY2001, as well as a number of officials and specialists from the civil aviation sector, media representatives and social networking sectors.
Unsurprisingly, both cabin crew on board the aircraft, as well as airport ground staff, were very excited to see Oman’s new airport embark on yet another step of what has been a long journey.
“I feel wonderful to be serving people on the first trail flight, you can’t even imagine how happy I am to be here today,” said one of the ground staff at the airport.
“This day is a big day, and I am expecting it to be even better when we take real journeys in the future,” added a cabin crew.
Another crew member said, “This is a wonderful day, and I am happy, just happy because I can’t even express how I feel, because no words are coming from me, except for the fact that I am enjoying this moment”
A statement from Oman’s Ministry of Transport and Communications highlighted in detail the extent of the trials at the new airport, which are essential to ensuring its smooth and sustainable operation in the long-term.
“This is an important step in the pilot phase and the progress of the new Muscat International Airport project, which simulates the actual operation of the airport through the conveyance of passengers at all the usual stages of travel using all the facilities, services and systems,” read the statement.
“This first pilot flight will be followed by several operational tests during the coming period, which will include the use of several aircraft to test all new aircraft positions to ensure the final integration of all systems, such as automatic guidance devices, fuel pumps, cooling and air conditioning.”
Residents who were on board the flight were part of the new airport and OAMC’s Join the Trials campaign, which looks to actively secure
the participation of those who live in the Sultanate, to allow for better feedback and form a closer bond between the nation’s infrastructure and its people.
In total, OAMC is looking to about 17,000 people to be part of its national campaign to test airport readiness and safety.
Progress has been good so far, with 22 trial runs taking place across more than 10 different airport facilities, an achievement which has
been made possible because of the participation of nearly 1,300 volunteers among citizens and residents and more than 6,500 employees of the airport family in cooperation between the readiness team at Oman Airports Management Company and its strategic partners, such as the Royal Oman Police, Oman Air and Oman Ground Handling Company.
The readiness teams are in coordination with consultants from Munich Airport in Germany, to organise and manage more than 35 advanced trial experiences of the airport, and the use of more than 17,000 volunteers from the general community and with different scenarios, and these tests will be weekly on every Wednesday in December, and every Monday and Wednesday starting from January 2018 until the actual commercial operation of the new passenger terminal at Muscat International Airport.