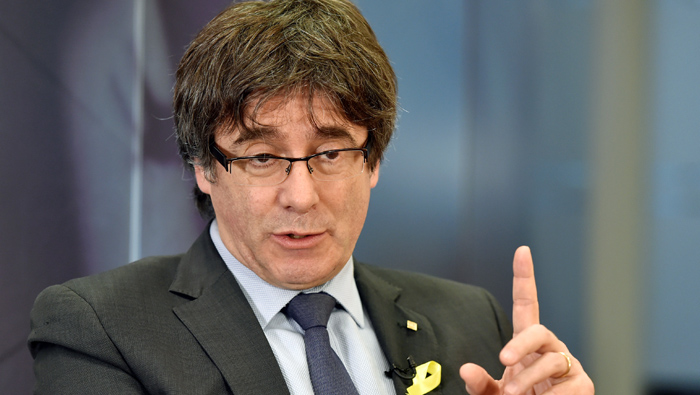 Barcelona: Ousted Catalan president Carles Puigdemont was weighing up whether to return to the region, where he faces arrest, close aides said Saturday, after pro-independence parties defeated Spain's central government in pivotal elections.
Puigdemont campaigned from Brussels, where he sought self-imposed exile after he was sacked by Madrid and a Spanish court charged him with rebellion, sedition and misuse of public funds.
After the divisive regional elections on Thursday, how the independence camp intends to rule remains a mystery, with other secessionist leaders, including Puigdemont's former deputy Oriol Junqueras, behind bars pending trial.
When asked if Puigdemont was inclined to return to the region, one of his lawyers in Catalonia said: "In principle yes, but my advice is to evaluate the situation because the moment he comes back here he would be arrested."
"We must assess if it is worth it, if he can do more inside than outside -- obviously if he returns and is imprisoned, that would create... a very significant political conflict," lawyer Jaume Alonso-Cuevillas told Catalunya Radio.
"We are studying all the scenarios," said Elsa Artadi, Puigdemont's campaign manager, told Rac1 radio on Saturday.
Artadi also called for talks with the central government of Prime Minister Mariano Rajoy after the polls, in which the three pro-independence groupings won an absolute majority in the Catalan regional parliament with 47.5 per cent of the vote.
Rajoy, meanwhile, has warned that the new Catalan government should fully respect the law, a reference to the former leaders' defiance on October 1, when they went ahead with an independence referendum despite being banned by the Spanish courts.
Catalan lawmakers went on to declare independence, prompting Madrid to sack Puigdemont's government, dissolve the regional parliament and call the snap elections that were held on Thursday.
Puigdemont on Friday picked up where he had left off in the tug-of-war with his nemesis, calling on Rajoy to hold talks in Brussels or anywhere else in Europe -- barring Spain.
Puigdemont's statement was in line with his strategy throughout the crisis, positioning himself as an equal to the Spanish prime minister and seeking recognition from the international community. But Rajoy quickly rejected the request.
"The person I should be meeting with is with the one who won the elections, and that is Mrs Arrimadas," Rajoy said, referring to centrist, anti-independence candidate Ines Arrimadas, whose Ciudadanos party got the best individual result, with 37 seats and 25 per cent of the vote.
"The top political force in Catalonia is Ciudadanos, a constitutional force," Arrimadas said in an interview published Saturday in the El Mundo newspaper.
"It is fundamental to highlight the fact that there is no majority in Catalonia in favour of independence," she said.
But Ciudadanos does not have the allies to form a government, with the three secessionist lists expected to reach an agreement to rule together with a 70-seat majority in parliament -- two fewer seats than their previous tally.
As the crisis continues, the economy is at risk in a region that has seen its tourism sector suffer and more than 3,100 companies -- including the largest banks, utilities and insurers -- move their legal headquarters out of Catalonia.