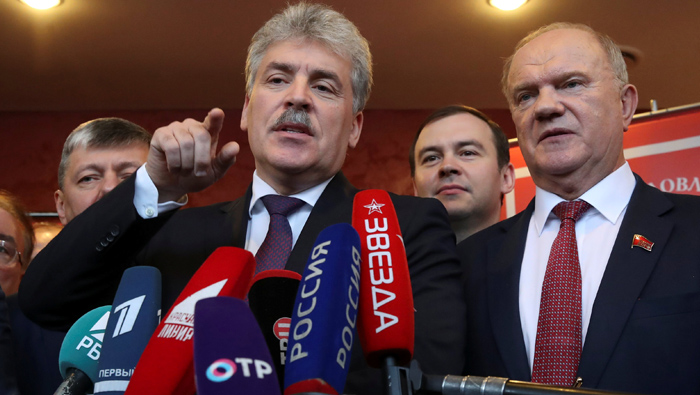 Moscow: The Russian Communist Party on Saturday unexpectedly dropped its veteran leader Gennady Zyuganov as its presidential candidate to challenge President Vladimir Putin next year, choosing instead a largely unknown businessman with links to the farm sector. Zyuganov, 73, an evergreen of the post-Soviet political scene, had been widely expected to contest his sixth consecutive presidential election next March. But instead the party picked Pavel Grudinin, 57, a mechanical engineer who has run a farm on the outskirts of Moscow since the mid-1990s, as its candidate to take on Putin in an election which the 65-year-old Kremlin leader is expected to win comfortably.
Zyuganov congratulated Grudinin on his nomination at an annual gathering of the party on Saturday, the Communist Party said on its website. By ditching one of the communist old guard as candidate and choosing someone from a new generation, the party appeared to be attempting to widen its political appeal.
Its main support base has been from an age group that is fast disappearing. Speaking at the meeting where Grudinin was nominated, Zyuganov said voter apathy, which many independent analysts say is on the rise, was now "Russia's biggest misfortune".
The communists came second after the ruling party United Russia, which backs Putin, in parliamentary elections in 2016 - but winning only 19.2 per cent of the vote.
Separately on Saturday, United Russia pledged its full support for Putin in what is expected to be a one-sided presidential contest.