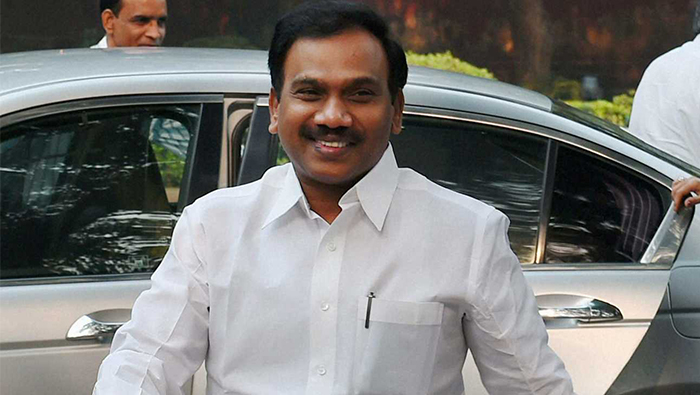 New Delhi: India's former telecoms minister was cleared Thursday of his alleged role in a multi-billion dollar rort that ballooned into one of the country's biggest-ever political scandals.
A New Delhi court acquitted A. Raja of corruption and also dropped charges against a slew of other bureaucrats and corporate executives implicated in the 2008 scandal that cost the state billions in lost revenue.
Judge O.P. Saini said there was a lack of evidence and Raja's supporters let off firecrackers outside the courthouse.
"I have absolutely no hesitation in holding that (the) prosecution has miserably failed to prove any charge against any accused," Saini told a packed courtroom.
The so-called "2G spectrum scam" came to light when a government auditor concluded that the tender process for 2G spectrum allocation was tainted by bribes and wholesale fraud.
The massive scandal, in which India's Congress government allegedly under-priced spectrum and favoured certain firms, seriously damaging the administration of former Prime Minister Manmohan Singh.
In 2012, India's top court cancelled 122 licenses for eight firms, saying the sale of permits was marred by graft that cost the treasury as much as $39 billion.
Analysts say the fallout contributed to the Congress party's heavy defeat at the 2014 elections.
Prime Minister Narendra Modi and his right-wing Bharatiya Janata Party won that poll in a landslide, campaigning in part of a pledge to clean up corruption.