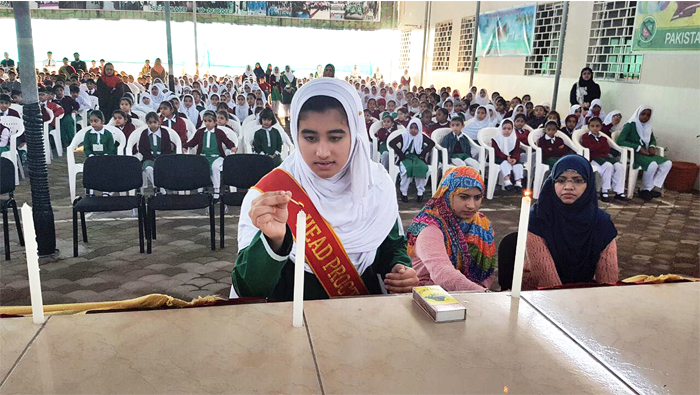 Muscat: Pakistanis in Oman marked the third anniversary of the Peshawar school massacre, in which at least 149 people were killed, with prayers and remembrance.
Pakistan School’s (PS) branches in Muscat, Seeb held special assemblies and programmes on December 18 while Sohar branch on December 19 to commemorate the “black day.”
It could not be done earlier because December 16 and December 17 were declared holidays due to heavy rains. A minute’s silence was observed in all the three schools.
Students and teachers alike made supplications for the murdered schoolchildren. Students of PS Muscat performed skits and songs to remember the victims. In PS Sohar, children paid tributes in the form of flowers and cards.
Munazza Ghafoor, Principal of PS Muscat, said: “We will never forget the sacrifice of the martyred children. I convey my sympathies to the families of the victims.” On December 16, 2014, six gunmen from militant group Tehrik-e-Taliban Pakistan (TTP) entered the premises of Army Public School in Peshawar, a city in northwest Pakistan. According to the Pakistani military, the gunmen killed 132 schoolchildren aged between eight and 18 years. Others who were killed included 11 teachers. The six attackers were killed by the Pakistani army.
TTP said that they had carried out the massacre, mainly targeting army officers’ children, in response to an army operation that targeted them in the country’s north Waziristan.
Madiha Asif, who is based in Muscat, had reported on the massacre for Pakistani daily The News International.
She recalls flying out to Peshawar from Karachi. Madiha stated that it had been very difficult speaking with the parents of the massacred children. “I met the father of a victim, a teenage boy, but I could not jot down a word. We both broke down into tears, and I left the place with the intention of returning to Karachi.”
“I called my mother over the phone and cried again. She encouraged me to stay, not to get a good story but out of respect for the pain that the families were experiencing.” The expat mentioned that she had offered fatiha (special prayers) for the dead children on the third anniversary on the advice of her mother.
“I gathered some of my friends and held prayers for the victims and their families. While praying for them, it still felt like it was yesterday. My hands still get sweaty and my body still trembles just thinking about it,” she maintained.
Qamar Riaz, a former Urdu journalist who runs a business in Muscat, had written a poem and an essay in honour of the victims. It was published in a book called Qatl-e-Gul, an anthology comprising works on the massacre, written by Pakistani authors, many of them based in the Gulf. The anthology was compiled by author Suleman Jazib.
“Pakistan has suffered so much due to terrorism. God willing, we will defeat this scourge,” Riaz remarked. Ali Javed, Pakistan’s envoy, noted: “The Pakistani nation remains unfaltered in its commitment to upholding the UN Charter, international law and peace and security.”