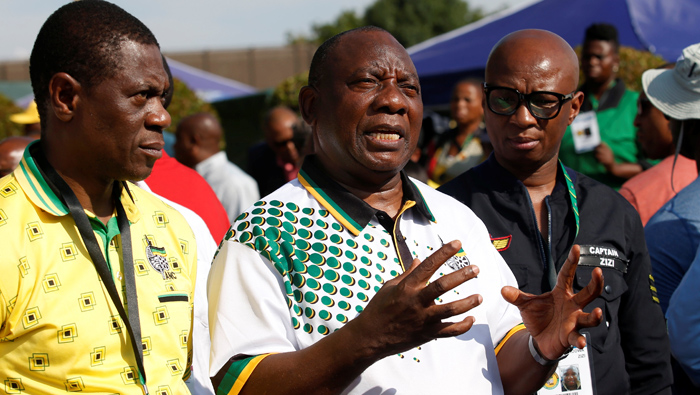 Johannesburg: South African deputy president Cyril Ramaphosa faced wide-ranging challenges Tuesday after being elected to lead South Africa's ruling party as it grapples with corruption allegations and disunity.
He narrowly won the vote to become head of the African National Congress (ANC) on Monday after a bruising race that exposed rifts within the organisation that led the fight against apartheid.
Thousands of raucous Ramaphosa supporters sang and chanted in the conference hall as rival backers of defeated candidate Nkosazana Dlamini-Zuma appeared dejected.
The victory puts Ramaphosa in line to succeed President Jacob Zuma, whose reign has been plagued by corruption scandals, a slowing economy and anger at the once-omnipotent ANC.
Zuma, who faces prosecution for alleged fraud, is now predicted to step down as national president next year after ruling since 2009.
"He is unlikely to hold out until the end of his term... as this will damage the party ahead of the 2019 election," political risk consultancy Eurasia said.
"Zuma is thus likely to end his tenure sometime in the second half of 2018."
Ramaphosa is set to enjoy a brief honeymoon period -- the rand currency rose four per cent against the dollar, suggesting investor confidence in the wealthy former businessman, before pairing gains.
But he still faces unenviable challenges on public sector cuts to control the ballooning budget and how to battle Zuma-era corruption.
Political analyst Richard Calland warned that Ramaphosa would be constrained by allies of Zuma who were also elected into top ANC positions on Monday's vote.
"The winner has inherited a mixed blessing, possibly a poisoned chalice," Calland said.
"It's going to be very difficult for him to manoeuver, he'll have to reach compromise at every step."
A vast image of the ANC's new leader was unfurled as long applause and loud singing greeted the election result at the party conference venue outside Johannesburg. Outside the hall, ANC supporters blocked a road leading to the conference centre, dancing and singing party songs. Ramaphosa is due to make his first speech as leader on Wednesday as the conference draws to a close.
Zuma was seen as backing the campaign of Dlamini-Zuma, his former wife, allegedly to try to secure protection from prosecution after he leaves office. The ANC, which has ruled since 1994 when Nelson Mandela won the first multi-racial vote, could struggle to retain its grip on power in the 2019 election due to falling public support.
"I hope you will cooperate with the new leadership... as we move to the 2019 elections," Baleka Mbete, outgoing party chairwoman, told nearly 5,000 delegates who voted for the new ANC leadership.
Ramaphosa, 65, is a former trade unionist leader who led talks to end white-minority rule in the early 1990s and then became a multi-millionaire businessman before returning to politics. He is often accused of failing to confront Zuma while serving as his deputy since 2014.
"Ramaphosa will work to bring back the principles of liberal politics in the party," Amanda Gouws, politics professor at Stellenbosch University, told AFP.
"The outcome of the vote was not easy to call. What is at stake here is unity -- the new leaders need to forge unity and rebuild the image of the party."
Soaring unemployment and state corruption have fuelled frustration at the ANC among millions of poor black South Africans who face dire housing, inadequate education and continuing racial inequality.
"Our people are not happy with the state of the ANC," Zuma said as he stepped down as party chief at the conference, blaming perceptions of being "soft on corruption, self-serving and arrogant."
The party recorded its worst-ever results in last year's local elections and will face threats from the centre-right Democratic Alliance and radical left Economic Freedom Fighters parties at the 2019 poll.