35 rescued from vehicles during storm in Oman 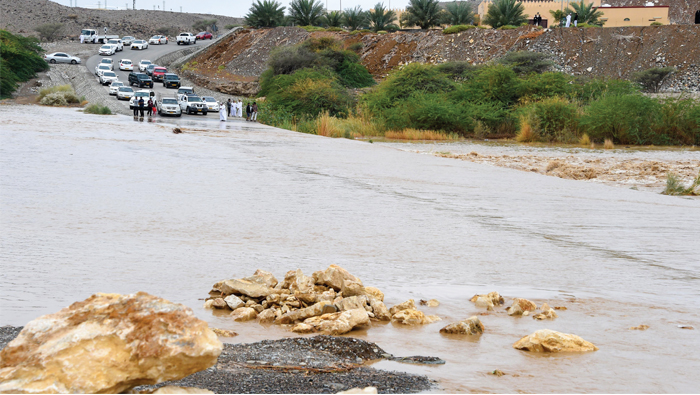 Muscat: Some 35 people were rescued from 29 vehicles during the storm that wreaked havoc across Oman, according to the police.
A Royal Oman Police (ROP) spokesperson said that they had received calls to assist 29 vehicles in the Sultanate and rescued 35 people.
“Seven of those were expatriates. Three Emiratis were rescued in Dibba in Musandam, three Egyptians were trapped in a wadi, and one Pakistani was trapped in Wadi Haseem in Izki,” the spokesperson said.
However, no fines were imposed on the people who risked their lives and crossed the wadis. “In emergency cases, we cannot be sure of the situation and dealt with them humanely,” the spokesperson clarified.
According to Omani law, people who risk their lives and cross flooded wadis can be fined OMR500.
Meanwhile, some parts of the Sultanate’s governorates witnessed heavy rains on Monday. Several wadis in Oman were flooded.
The Ministry of Regional Municipalities and Water Resources recorded the highest rainfall in Dibba with 47mm of rain. Quriyat recorded 35mm, Sohar 22mm, and Rustaq 19mm.
Temperatures dropped to -5 degrees Celsius in some places in the Al Hajar Mountain Range after the rainfall on Tuesday, according to Badar Al Baddaei, the owner of a local weather monitoring website, Rathth.net.
Oman’s highest mountain range, Jabal Shams, recorded a minimum temperature of -5 degrees Celsius on Tuesday, revealed Al Baddaei.“It is really very cold at night,” he said.
Jebal Shams, part of the Al Hajar Mountain range and situated at an altitude of 3,004 metres above the sea level, recorded a low of -8 degrees Celsius .
In its 24-hour outlook, the National Multi Hazard Early Warning Centre said there would be clear to partly cloudy skies along parts of the Omani coastal area and over the Al Hajar Mountains, with a chance of isolated rain, and clear skies over the rest of Oman.