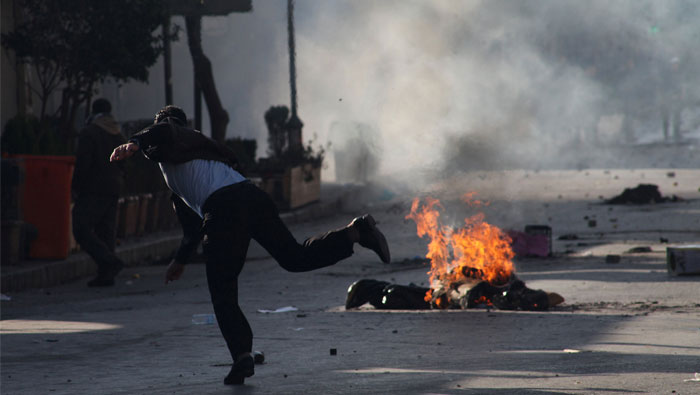 Sulaimaniyah: Five people were killed and dozens wounded in Iraqi Kurdistan Tuesday as security forces opened fire during clashes with protesters, an official said, as anger grew over a failed independence push.
Demonstrators torched the offices of two political parties in Raparin in the autonomous region's Sulaimaniyah province, said a spokesman for the local health department, Taha Mohammad."Clashes erupted with the security forces who opened fire, leaving five dead and at least 70 wounded," he said. It came as protests broke out for a second day over the disastrous fallout from an independence referendum in September that delivered a resounding "yes" but drew sweeping reprisals from Baghdad.
The September referendum delivered a resounding "yes" for independence, but drew sweeping reprisals from Baghdad which dealt a heavy blow to the autonomous region's already flagging economy.
Medical sources said some 100 people were injured as protests hit second city Sulaimaniyah and a string of other towns.
In Sulaimaniyah, security forces fired in the air to disperse demonstrators and roadblocks sprang up on major roads and around the offices of the main political parties.
The city is a bastion of opposition to former regional president Massud Barzani who organised the independence vote, but all five of the region's main political parties saw their offices attacked on Monday.
Protests were also held in the Sulaimaniyah province towns of Rania and Kifri, and in Halabja and Koysinjaq in neighbouring Arbil province.
In Koysinjaq, demonstrators set fire to the mayor's office, while in Kifri hundreds stormed the offices of Barzani's Kurdistan Democratic Party after pelting the building with stones, witnesses said.
"You're incapable -- incapable of defending the disputed areas and incapable of ruling the Kurdistan region," one demonstrator shouted.
The disputed areas are a large swathe of historically Kurdish-majority territory outside the autonomous region that Kurdish leaders have long wanted to incorporate in it.
The Kurds took control of many of these areas during the fightback against the IS militant group from 2014.
But after the independence referendum, federal forces retook nearly all of them, including the large city of Kirkuk and its nearby oilfields, which accounted for a major part of the autonomous government's revenues.
After his gamble on the referendum backfired spectacularly, Barzani announced he was stepping down in late October.
Legislative and presidential elections in the region due on November 1 were postponed because of the turmoil.
Prime minister Nechirvan Barzani, the ex-president's nephew, has pledged to hold the polls over the next three months.
Issam Al Fayli, professor of political science at Baghdad's Mustansiriya University, said the explosion of anger was directed against the political status quo that has dominated Iraqi Kurdistan for years.
"These demonstrations are targeting all politicians because the people believe that they make them live without justice," he told AFP.
"This is the first time that there are demonstrations against all Kurdish figures across the board, and I believe that we are headed for a radical change as there is currently no politician capable of leading."
Residents in the regional capital Arbil told AFP that salaries have been slashed since September and that the price of kerosene for heating has reached new highs.
There are only four hours of electricity each day, and many people are unable to cover the costs of running generators, they said.
The federal government appears to be giving short shrift to the worsening economic crunch facing the Kurds, with Baghdad looking to cut the share of the national budget allocated to the region from 17 per cent to 12.6 per cent.
"What is happening in Kurdistan is due to the poor policies of the autonomous government and the political parties," said government spokesman Saad Al Hadithi.
He insisted the root cause of the economic problems was the Kurdish authorities exporting oil without Baghdad's consent and "with no transparency or oversight".
But analyst Fayli warned that the federal government needs to step in to help fix the crisis or risk watching the discontent spiral out of control.
"If the autonomous government collapses, then that will create a political void that will hit stability in the country," he said.