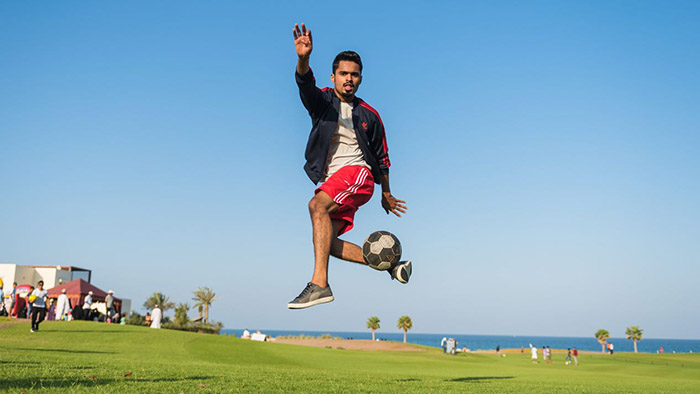 Mohammed Al-Nowfali, Oman’s first freestyle footballer, performs impromptu shows to draw people’s attention.
The 22-year-old from Sohar was selected to participate in the 2016 Red Bull Street Style World Finals in London. He has toured the world, showcasing his talents in front of iconic landmarks in Italy, Britain, Egypt, Sudan, the UAE, and Qatar. He has even met some of the world’s most recognisable stars such as Sean Garnier — the first freestyler in the world.
Freestyle in football is the art of juggling the ball using head, shoulders, knees and toes.
Mohammed started playing football at the age of four, but became fascinated with freestyling at 13.
“In this form, I like the fact that we are doing what we want, wherever we want; we can translate our passion for football into the show,” said Mohammed.
He has been practising his skills for the last 10 years. “My initiation in the field of freestyle football was not planned. It happened with time because of the new ties between regular football and freestyle football,” he explained.
“I was trying to mimic professional footballers like Ronaldinho and Cristiano Ronaldo after watching them on YouTube,” he recalled.
“In the beginning, I felt that what both Ronaldinho and Cristiano were doing was very difficult or impossible to do. However, after several attempts, I was able to master some of the moves,” he said.
**media[791722]**
After Mohammed realised that these tricks were not impossible, he committed to serious practice and a sustained exercise regime.
Mohammed’s first appearance was in Red Wall Street Style Championship 2008. He participated in three consecutive seasons of the championship and bagged the first place in the Sultanate. He then qualified to participate in the world finals in Italy.
“I want to make people aware about freestyle, and I want to make this art purposeful. I have tried to give messages to the public in an informal way,” he emphasised.
“I challenged myself to present my message on the road in just 10 minutes,” he said.
“I did the show in front of Smart traffic lights which don’t function like regular signals and allow me more time to perform tricks. I have done such shows for longer periods. I have tried to tell the public that we must practise our talents but at the right places.”
He revealed that he practised at least four times a week, even though he has other work to contend with.
He recently participated in two Arab tournaments — the Arab Republic of Egypt and the United Arab Emirates championships.
“I was unlucky to be eliminated in the eighth round in Egypt, but in the UAE, I got the third place,” he said. He has also participated in several shows in the UAE.
Furthermore, he has done several shows in Qatar, the most prominent being during the match between Qatar and Uzbekistan in the World Cup Finals in 2014.
Mohammed said that he had no plans to hang up his boots.
He prefers to have pop-up performances rather than staged shows, as his main goal is to touch people’s hearts with his talent and knowledge.