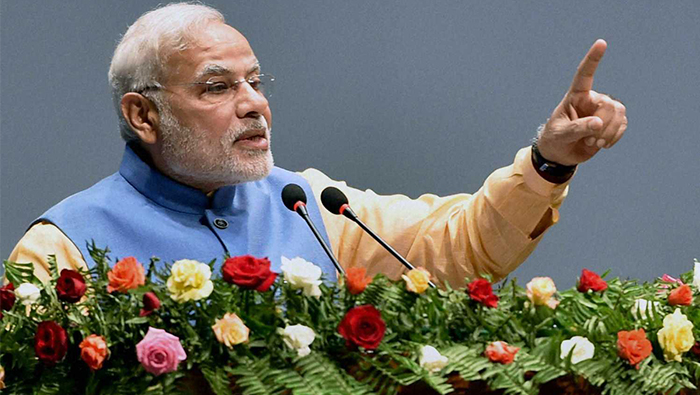 New Delhi: India's ruling Bharatiya Janata Party (BJP) was set to win an election in Prime Minister Narendra Modi's home state on Monday, the vote count showed, but with a reduced margin, which will be a boost for the opposition.
A combined opposition led by the Congress party had mounted a tough challenge in the western state of Gujarat, hoping to weaken Modi in his home base by exploiting discontent over a lack of jobs and a national sales tax that hit business.
The BJP won more than 100 seats in the 182-member state assembly, projections by India Today, CNN News18 and TimesNow showed.
A party needs 92 seats to rule the state. Congress, led by Rahul Gandhi, who formally took over as party president at the weekend, was set to win more than 70 seats, far better than it had done in the past.
A relieved BJP said Modi's popularity remained intact.
"There is no other leader close," said Shyam Jaju, party vice president.
The mood in the BJP headquarters in New Delhi and in Gujarat’s main city Ahmedabad was initially tense as early trends showed a close fight.
But later workers gathered to shout slogans and cheer victory.
Modi's party was also ahead in Himachal Pradesh, the Himalayan state in the north also voting for a new state assembly.
Modi faces a general election in 2019, but before then, the opposition aims to slow down Modi's momentum in state elections, with two more next year.
Businesses across India have been struggling with the poor implementation of a goods and services tax that aims to harmonise an array of state and federal taxes but entangled them in cumbersome procedures.
Stocks firm after early weakness
Modi's shock ban of high-value currency notes in November last year, as part of his fight against corruption, also disrupted small business that forms the bedrock of his support base.
Indian stock markets opened weaker, with the 50-share NSE index down almost 2 percent as early trends showed a close contest in Gujarat.
But stocks reversed the losses later - the 50-share NSE index was trading up 0.7 percent at 0455 GMT.
The partially convertible rupee was trading at 64.32/33 to the dollar versus its previous close of 64.04. The rupee had dropped to a low of 64.74 in early trade.
Almost all pre-vote and exit polls had predicted a comfortable victory, but the polls have often gone wrong in the past.
To ensure his party’s prospects, Modi addressed dozens of rallies during his campaign in Gujarat, performed rituals and even waved from a seaplane on his last day on the campaign trail.
"If they had lost Gujarat, the BJP would have collapsed like a pack of cards," said Congress member Sharmistha Mukherjee.
"This is their citadel, they threw everything at it."
In the Congress party office in Ahmedabad, posters of Rahul Gandhi were being pasted on the wall.
"Rahul Gandhi’s hard work has paid off in the state and it proves that Modi’s governance is not making anyone happy," said a Congress leader, Shaktisinh Gohil.