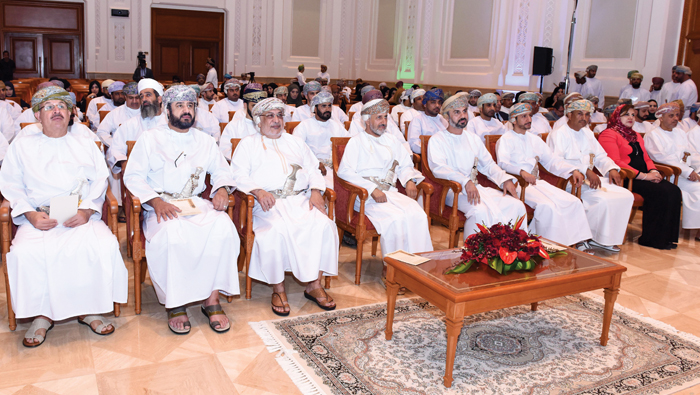 Muscat: The Majlis Al Shura inaugurated in the Council of Oman yesterday a number of electronic projects, which included its visual identity, its new website and the application of the Council in smart devices, as well as a set of internal pages and rules of the Council, such as the electronic documentation of the Council’s documents.
The inauguration ceremony was held under the patronage of Nasser bin Hamoud Al Kindi, Secretary General of the Royal Court Affairs, in the presence of a number of ministers and members of the State Council, members of the Majlis Al Shura and officials of the State Council and Shura.
The chief guest inaugurated the Majlis’s visual identity, as one of the most important tools for unifying the general organisational framework for the work of the Majlis and its internal and external activities.
The Council also celebrated the launch of its website, which comes as an integrated platform to provide a comprehensive information service, thus contributing to the introduction of the vital role played by the Majlis in the legislative and regulatory aspects.
Majlis also launched a package of electronic systems through its internal network, which included the electronic documentation of the Majlis’s documents, which came in line with the Majlis’s orientation towards e-Government.
Discussion
The Office of Majlis Al Shura discussed in its meeting several issues referred by the government, top on these were the ministerial responses, in addition to reviewing the letters of the Standing Committees, the letters of the members of Majlis, reviewing the legislative and supervisory means and tools provided by the members of Majlis.
This came at the 4th meeting of the Majlis Office of the third annual sitting (2017-2018) of the eighth term of the Council 2015/2019 under the chair of Khalid bin Hilal Al Ma’awali, Chairman of Majlis Al Shura.
As for external affairs, the Office reviewed the letter of the Speaker of the Arab Parliament on the recommendations of the Palestine Committee in the Arab Parliament at its meeting held in the Sudanese capital Khartoum and requested the activation of these recommendations.
Rabat meeting
The Majlis participated in the summit of the heads of the Arab Parliamentary Councils, the extraordinary session of the Arab Parliamentary Union to discuss the latest developments related to the status of Jerusalem, which was held in Rabat, the Kingdom of Morocco.
The delegation comprised Dr. Mohammed bin Ibrahim Al Zadjali, a member of Majlis Al Shura, Murad bin Ali Al Hooti, member of Majlis and Abdullah bin Ahmed Al Harthy, Director of the Parliamentary Division of Majlis.