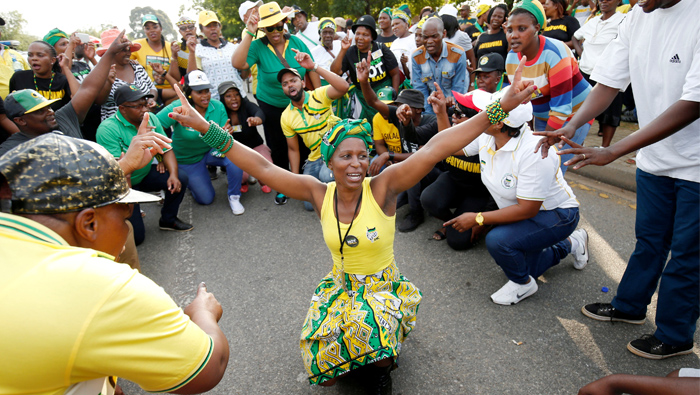 Johannesburg: South Africa's ANC formally nominated two candidates in a race to succeed President Jacob Zuma as leader of a party that has ruled since the end of apartheid but lost its lustre in a welter of scandal and corruption allegations.
Whoever emerges at the helm of the African National Congress, a 105-year-old liberation movement that dominates Africa's most industrialised economy, is likely to become the country's next president after elections in 2019.
Deputy President Cyril Ramaphosa and former cabinet minister Nkosazana Dlamini-Zuma were the only candidates nominated for the leadership of the African National Congress at a party conference on Sunday, an election official said.
The election is perhaps the most pivotal moment for the ANC in its 23 years of power. Scandal and graft accusations have tainted Zuma's presidency and the party that launched black majority rule under Nobel Peace Prize laureate Nelson Mandela is now deeply divided, its image tarnished at home and abroad.
After procedural delays that held up the start of balloting, the contest remained too close to call. Most grassroots delegates backed Ramaphosa, 65, while Zuma's preferred candidate, his ex-wife Nkosazana Dlamini-Zuma, 68, came second.
Ramaphosa drew the majority of nominations from party branches scattered across the country. But the complexity of the leadership race means it is far from certain he will win when the votes are finally counted.
Owing to the delays, the outcome is now expected only on Monday, said ANC Deputy Secretary General Jessie Duarte. "We don't rush results; we would like them to do a thorough and proper job," she said.
The ANC said 4,776 delegates would be allowed to vote. Ballot papers were being prepared by election officials before the voting started, a party source said. As well as electing a new leader, candidates for senior posts like the deputy president, chairman, secretary general and others were also nominated.
The ANC will also set policy priorities for the run-up to the 2019 election. Under ANC rules, a majority of nominations at the branch level is not the same as the most votes at the conference and delegates are not bound to vote for a particular candidate.
How the delegates do cast their ballots may also be subject to vote-buying and intimidation - widely acknowledged to have swayed previous leadership contests.
ANC Chairwoman Baleka Mbete, also speaker of parliament and running for the ANC's top seat, publicly endorsed Ramaphosa. "We publicly endorse comrade Cyril Ramaphosa," she told reporters after Saturday's opening session at the conference.
Mbete said she had not held talks with Dlamini-Zuma. A senior ANC source said: "It is going to be very close. Both camps have spreadsheets where they have calculated the number of delegates on their side. Both sides have different assumptions and guesswork." Social Development Minister Bathabile Dlamini, who heads the influential ANC Women's League, endorsed Dlamini-Zuma, the first woman to be nominated as a candidate for the ANC presidency. "We are ready for a female president," Dlamini said.
Carl Niehaus, a key member of Dlamini-Zuma's campaign, said she would be propelled to victory by "the grassroots and the poor. That is important in South Africa because we have a huge gap between rich and poor."
Dlamini-Zuma pledged during her campaign to tackle the racial inequality that persists in South Africa since the end of white minority rule. Ramaphosa has vowed to fight corruption and revitalise the economy. That message has gone down well with foreign investors.
Colin Coleman, managing director of Goldman Sachs in South Africa, described the two candidates as "quite divergent" in their views on how to revive a lacklustre economy.
In a boost to Ramaphosa, courts ruled that officials from some provinces seen as supporting Dlamini-Zuma had been elected illegally and were barred from the conference. The rand currency firmed more than 2 per cent after that news on Friday.
ANC Youth League leader Collen Maine, who backs Dlamini-Zuma, said that meant 122 delegates would be prevented from voting, something he called "not significant".
In his last speech as ANC leader on Saturday, Zuma announced plans to raise subsidies to tertiary colleges and universities, a move analysts said was timed to appeal to the more populist members of the party.
Zuma, who has been head of state since 2009 and ANC leader since 2007, has faced accusations that have damaged the ANC's stature and caused sharp internal rifts.
In August, he narrowly survived another attempt in parliament to force him from office after some members of his party voted with the opposition in a no-confidence vote.