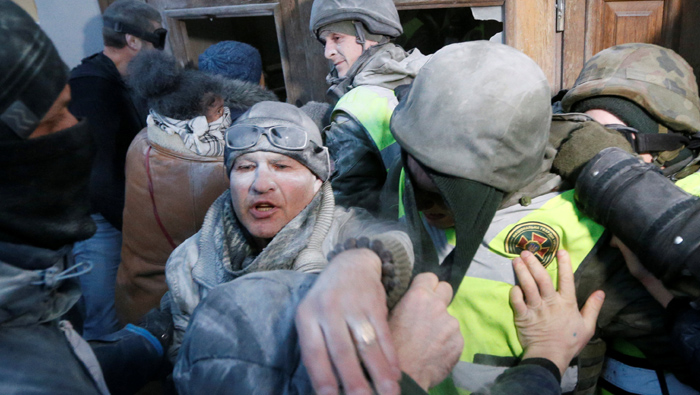 Kiev: Ukrainian police clashed with backers of opposition leader Mikheil Saakashvili on Sunday and prevented them from forcing their way into Kiev's October Palace after a rally against President Petro Poroshenko.
The confrontation, which included the firing of tear gas canisters, was the latest chapter in the former Georgian president's stand-off with Ukrainian authorities that led to his detention and release from custody last week.
The October Palace, a cultural centre, became a symbol of revolt when it was a key location in the 2013-14 pro-European uprising that ousted a Moscow-backed president and installed Poroshenko, who promised to eliminate widespread corruption.
Saakashvili, president of his native Georgia in 2004-2013, moved to Ukraine after an uprising there and served as a regional governor in 2015-16 before falling out with Poroshenko, whom he accuses of failing to stamp out endemic graft and being corrupt himself.
Poroshenko denies the accusations. Sunday's scuffles at the October Palace were an offshoot of a larger, peaceful opposition rally in which several thousand people marched through central Kiev earlier in the day, calling for Poroshenko's impeachment.
The situation was relatively calm at the Palace after darkness fell with a large number of riot police blocking the entrance to the centre, whose doors protesters had earlier tried to break through, some throwing stones and other objects. "We have to be calm, keep the peace," Saakashvili told a few hundred of his supporters, who remained outside the building. No serious injuries were reported in the clashes. Saakashvili accused the authorities of engineering the situation to provoke violence.
Earlier, he had called on protesters to set up a headquarters in the building. But later, he condemned any attempt to seize administration buildings. Interior ministry adviser Anton Gerashchenko held Saakashvili responsible for the clashes.
"Despite all the provocations as a result of which Mikheil Saakashvili wants to spill the blood of Ukrainians, he has not succeeded," he said in a post on Facebook. The comments continue a long-running blame game that has included prosecutor's accusing Saakashvili of assisting a criminal organisation, charges he says are trumped up to undermine his campaign to unseat Poroshenko.
Police said the attempt to charge into the October Palace occurred while a children's concert was going on inside. Ukrainian lawmaker Serhiy Leshchenko, who attended the rally, joined other opposition MPs in condemning Saakashvili's actions.
"This behaviour could destroy the remnants of trust among like-minded political associates and alienate society," he said on Facebook.