Considering dynamics and the forms of chaos 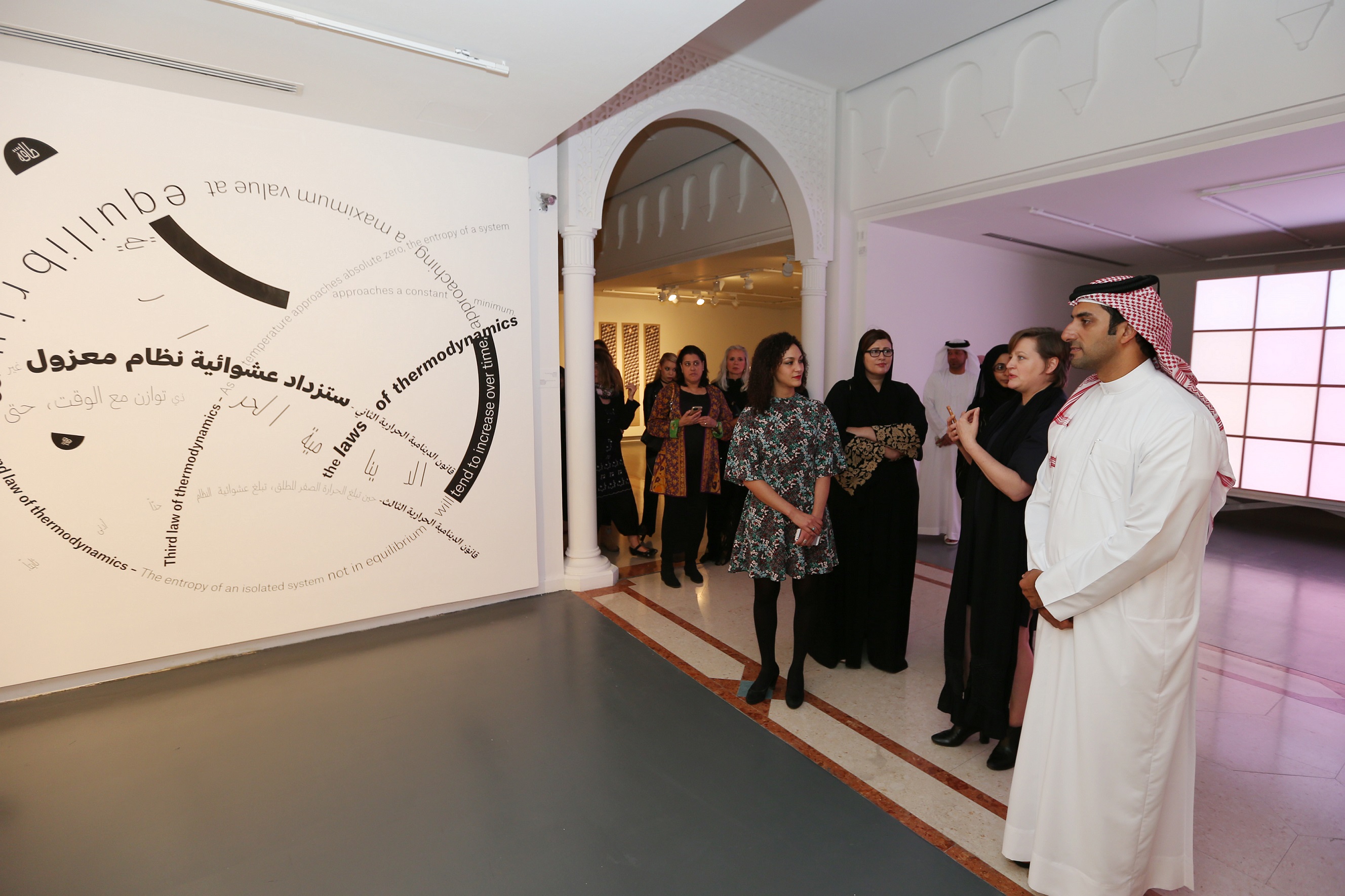 Two of Europe’s most established female artists have opened an exhibition of their works at Sharjah Art Museum.
Considering Dynamics and the Forms of Chaos features more than 25 works by British and Canadian artist Angela Bulloch, ranging from large scale installations and sculptures to mural paintings and sound pieces, and more than 60 paintings by German artist Maria Zerres.
**media[359075]**
The exhibition was officially inaugurated yesterday by HH Sheikh Sultan bin Ahmed Al Qasemi, Chairman of Sharjah Media Corporation. The opening was attended by Sheikha Nawar bint Ahmed bin Mohammed Al Qasimi, PR and Communications Officer at Sharjah Art Foundation, Manal Ataya, Director General of Sharjah Museums Department, Aisha Deemas, Director of Executive Affairs at Sharjah Museums Department, the artists Maria Zerres and Angela Bulloch, Curators Amira Gad and Brigitte Schenk, and a number of distinguished guests.
The exhibition stands out as being the first time either Zerres or Bulloch has exhibited in the UAE on such a scale, giving art lovers in the UAE and beyond, the opportunity to appreciate a diverse range of pieces by two internationally-acclaimed artists. Sharjah Art Museum has merged a wide selection of their work into two parallel exhibitions framed under a single theme. The exhibition title refers to each artist’s representation of chaos and disorder through different art forms and styles.
**media[359076]**
Manal Ataya, Director General of SMD said: “Sharjah Art Museum is constantly seeking to expand the boundaries of our understanding and appreciation of art. We believe this exhibition will have a significant impact on all our audiences from art students to the general public.”
Considering Dynamics and the Forms of Chaos refers to each artist’s interpretation of the notions of entropy through their respective visual style and artistic mediums. Entropy is commonly understood as a measure of disorder. In contemporary art, since the late 1960s, it has emerged to refer to installations often associated with representations of order, disorder and information, and their uniformity.
Maria Zerres is a German artist based in New York and Germany who began her studies in art at the Pedagogical University of Cologne in 1981 and the following year moved to study at the Academy of Applied Arts in Vienna. She has featured in major solo presentations and exhibitions throughout the US and Europe, including the Venice Biennial.
Her collection of more than 60 paintings at Sharjah Art Museum is curated by Brigitte Schenk (Galerie Brigitte Schenk, Germany). The paintings display forms of disfiguration and strategies of abstraction. In her works, ideas of entropy appear through chaotic brush strokes that result in a sense of uniformity.
Angela Bulloch is a British/Canadian based in Berlin who works with sculpture, installation and sound. Educated at Goldsmiths’ College, London, she was nominated for the Turner Prize in 1997 and featured in the 1988 Damien Hirst-organised Freeze exhibition.
Her selection of works at Considering Dynamics and the Forms of Chaos is curated by Amira Gad (Serpentine Galleries, UK). Bulloch’s artistic practice can be perceived through the lens of an idea of entropy that is related to its application in information theory. Her series of Pixel Boxes, for example, code information that is abstracted into a visual representation and then turned into a visually aesthetic and harmonious installation. Ataya said: “We encourage visitors to look beyond the aesthetics of the pieces to examine the artists’ similar use of technique and references to specific genres such as minimalism, conceptual, and abstract art.”
Alongside the exhibition will be a series of workshops starting from March 10 and running throughout the duration of the show. The workshops ‘Express Yourself’ forms part of the museum’s accessibility programme.
It includes a tour of the exhibition followed by a workshop where participants are asked to express their feelings in response to Maria Zerres’ paintings. Prior booking is required.
A catalogue published by Sternberg Press and the Sharjah Art Museum will be released alongside the exhibition.
For more information: sharjahmuseums.ae