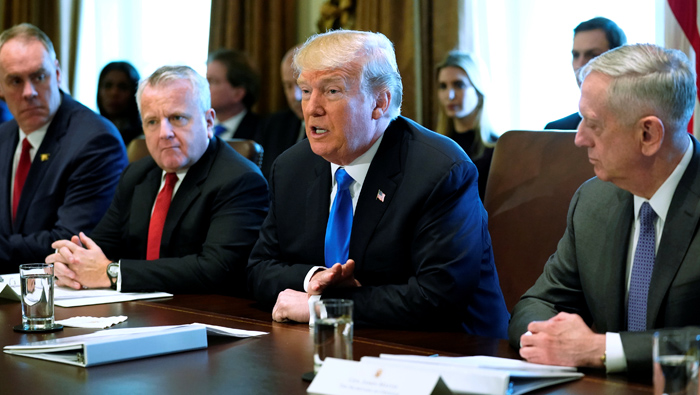 Washington: President Donald Trump reversed decades of U.S. policy on Wednesday and recognized Jerusalem as the capital of Israel, despite warnings from around the world that the gesture further drives a wedge between Israel and the Palestinians.
In a speech at the White House, Trump said his administration would also begin a process of moving the U.S. embassy in Tel Aviv to Jerusalem, which is expected to take years.
The status of Jerusalem has been one of the thorniest issues in long-running Mideast peace efforts. Israel considers the city its eternal and indivisible capital and wants all embassies based there.
Palestinians want the capital of an independent Palestinian state to be in the city's eastern sector, which Israel captured in the 1967 Middle East war and annexed in a move never recognized internationally.
Trump's decision is likely to please his core supporters - Republican conservatives and evangelical Christians who comprise an important share of his political base.
Trump aides contend the move reflects the reality of Jerusalem as the city is the seat of the Israeli government. Trump called his decision a "a long overdue" step to advance the peace process.
"I have determined that it is time to officially recognize Jerusalem as the capital of Israel," Trump said. "While previous presidents have made this a major campaign promise, they failed to deliver. Today, I am delivering."
Trump acted under a 1995 law that requires the United States to move its embassy to Jerusalem. His predecessors, Bill Clinton, George W. Bush and Barack Obama, had consistently put off that decision to avoid inflaming tensions in the Middle East.
A Palestinian envoy said the Trump decision was a declaration of war in the Middle East. Pope Francis called for Jerusalem's status quo to be respected, saying new tension would further inflame world conflicts. China and Russia expressed concern the plans could aggravate Middle East hostilities.