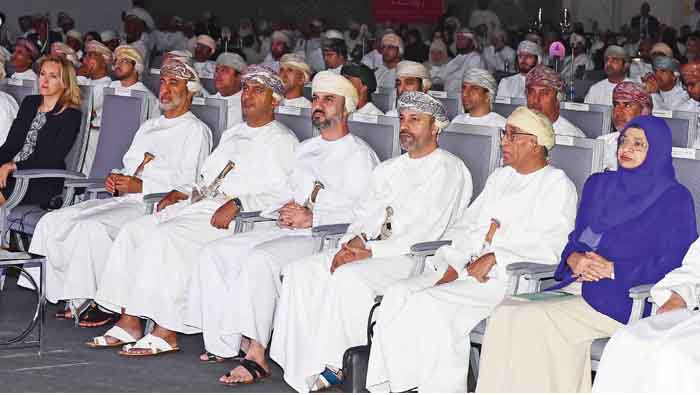 Muscat: Every resident can help make Oman a thriving, sustainable country that remembers its proud heritage by 2040, His Highness Sayyid Haitham bin Tariq Al Said, Minister of Heritage and Culture, said as he officially opened the Future Foresight Forum.
The two-day think tank aims to look into the future to assess the needs of the Sultanate by 2040 – and establish the framework to ensure Oman thrives over the next two decades.
Government statistics reveal that the population of the country could double by 2040, to over eight million. The Minister of Heritage and Culture, who is also the Chairman of the Main Committee of Future Vision (Oman 2040), said the forum looks to create a strong and sustainable country by the year 2040, and highlight the national, regional and international concerns the nation will face, as well as finding innovative solutions to tackle these issues.
Sayyid Haitham said: “In continuation of the Sultanate’s approach to long-term planning and the Blessed Renaissance march, we are meeting as partners in the responsibility of making the Sultanate’s future and vision, after the Royal Decree was issued in December 2013 to prepare the future vision (Oman 2040) and to formulate it with perfect accuracy in light of the broad community consensus and participation of all different segments of the society, so that they become aware of the socio-economic reality and objectively visioning the future to be recognised as a key guide and reference for planning work in the next two decades.
“In implementation of these directives, the preparatory stage for the development of the future vision was launched. The task forces and the technical committees were formed.
“In addition, the relevant committees have prepared a strategy for communication and community participation, which will be launched today through this forum to be an effective approach in preparing a vision for all citizens and residents who meet their needs and meet their aspirations in every location and throughout the Sultanate’s governorates.”
Sayyid Haitham affirmed that the focus of the think tank would be on sustainability of the environment, the promotion of social welfare and building and developing national competencies and capabilities while preserving the national identity and heritage of Oman, supported by the effectiveness of governance.
Dr Yusuf Al Balushi, of the Oman Future Vision 2040 planning office, said: “We are putting society at the heart of our vision, because vision is about the future, and today we are trying to see what the future will look like.
“We will be discussing nine important topics and have invited well-known speakers to see how things will be in 20 years’ time. We began preparing for the Oman Future Vision 2040, almost two years ago, and there were two stages looking into investigations for the future. These have already been completed, and assessed our previous performances, and also assessed our key issues.
“We are very positive about this, because Oman never stopped moving,” he added.
“Our Vision 2020 helped us achieve a lot in terms of infrastructure and the readiness of human resources, which is a source of power for 2040.”
“The Future Foresight Forum is one of the more modern tools and aids to setting Vision 2040,” added Mutaz Al Riyami, from the think tank. “Events like this allow you to step back and focus on the major drivers that influence what is happening around us, and these will impact us as much as we will be able to impact them.
“Equally important is connecting the dots across the various sectors,” he added. “If you talk about demographic change, then it has implications not just in terms of infrastructure and urbanisation, but also in terms of energy demand and energy use. This has a direct connection in terms of aspects such as diversification of the economy.
According to the National Statistics and Information (NCSI), the Sultanate’s population could cross eight million by 2040. Assuming a high birth-rate of 4.5 children per women, the population of the nation could reach about 8.17 million.
To accommodate the added health, electricity, housing, water, health and education needs, the Sultanate will require to spend about OMR2.9 billion, compared to an annual estimated GDP increase of OMR 19.8 billion, and a gross domestic output of up to OMR269 billion.
Oman will also need 576,000 new housing units, consuming about 11.12 million gigawatts per hour of electricity, and an additional OMR 336 million to cover the costs of electricity production.
Oman will also need an extra 63.8 billion gallons of water, which will need a further OMR 377.2 million for water production.
An additional 13,115 doctors, 2,146 pharmacists and 25,832 nurses will be required to tend patients, at the cost of OMR758.6 million, as will another 64,242 teachers and 21,796 classrooms to teach the extra 2.2 million students that will be expected to join the school education system, with the new infrastructure setting the government back a
further OMR1.428 billion.