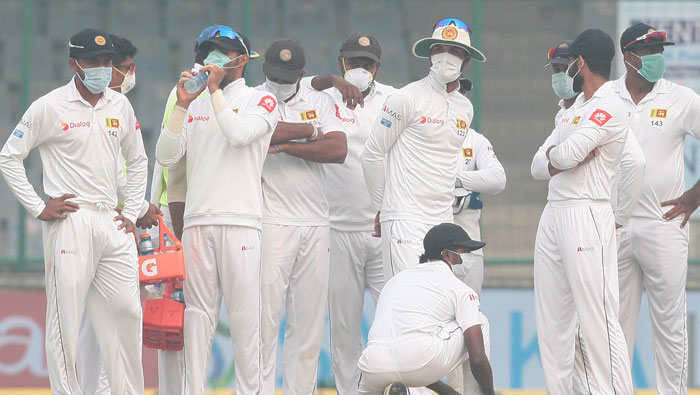 New Delhi: Unprecedented scenes of Sri Lankan cricketers wearing face masks have reignited debate about hosting major sports in heavily polluted New Delhi, where doctors are increasingly vocal about the health risks posed by smog.
Medics urged cricket's governing body to revise its rulebook after the third Test match between India and Sri Lanka went ahead in the capital despite players visibly struggling and wheezing for air.
Sri Lankan fast bowler Suranga Lakmal vomited twice on the ground while fielding on day four of the match on Tuesday, before returning to the dressing room looking pale and sick.
Groundsmen rushed in to cover the spot with sand and sawdust as air pollution at Feroz Shah Kotla stadium soared to hit 15 times the World Health Organization's safe level.
A doctor present at the stadium examined three Sri Lankan players and said their vitals were normal.
But the visiting side had complained of illness in the days before, with the match halted three times on Sunday as umpires consulted team doctors before allowing play to resume.
The Indian Medical Association condemned that decision, warning that playing in such conditions put athletes' health at serious risk.
"This match should not have taken place in the first place. It is time the ICC (International Cricket Council) comes up with a policy on pollution," said IMA president K. K Aggarwal.
"You have fast bowlers, batsmen and fielders out there exposed to these very harmful pollutants over five days at a stretch. It takes a serious toll on your health in the long run."
The sport's governing body declined to comment.
India's powerful cricket board accused Sri Lanka of making a "big fuss", pointing to Indian skipper Virat Kohli who hit a record sixth Test double century despite the smog.
But the US embassy website has repeatedly urged Delhi residents to "avoid all outdoor exertion" as concentrations of the smallest and most harmful airborne pollutants known as PM2.5 soared to hazardous levels.
These tiny particles -- a fraction the size of human hair -- lodge deep in the lungs and are linked to higher rates of chronic bronchitis, lung cancer and heart disease.
The concentration of such particles Tuesday hit 398 -- compared to a maximum level of 25 considered safe by the World Health Organization over a 24-hour period.
Even limited exposure can cause shortness of breath and make the eyes weep and throat burn.
Pollution levels generally rise during the winter in Delhi and across northern India and neighbouring Pakistan, fuelled by crop burning in the region and the fact that cooler air traps particulates close to the ground.
The smog has become especially alarming in the past two years, casting doubt on the future of sports events in the sports-mad swathe of South Asia.
"This should be a wake up call for Pak. Our children are at a huge risk because of dangerous pollution levels," tweeted former Pakistani captain and political opposition leader Imran Khan about the India-Sri Lanka Test.
Doctors and public health campaigners have escalated their fight against sports events in Delhi in recent years.
Last month more than 30,000 runners competed in the Delhi half-marathon -- just days after smog shut schools amid a public health emergency in the capital.
Doctors warned of dire health consequences and challenged the race in court but it went ahead, with runners complaining of burning eyes and sore throats.
Greenpeace lobbied in October against India hosting the FIFA Under-17 World Cup, warning it posed unacceptable risks to the world's youngest soccer stars.
It also proceeded but the schedule was adjusted to avoid Delhi at its worst.
"Others should also think about athletes health first," tweeted tournament director Javier Ceppi after images of Sri Lankan cricketers wearing face masks went around the globe.
Other events in Delhi -- like an Asian tour golf title in November and Indian Super League football matches -- attract less controversy but doctors say pose no less risk.
"Ideally, sporting events should not be scheduled in the winter months in Delhi," chest and lung cancer specialist Doctor Arvind Kumar told AFP.
"We cannot expose our athletes to inhuman levels of pollution just because a few hundred crores (tens of millions of dollars) is at stake."
The Test debacle in Delhi is not the first time cricketers have complained of air pollution in the capital, with Australia citing smoggy air following their loss to India in 1996.