On the ball: Oman’s football academies look to build on initial success 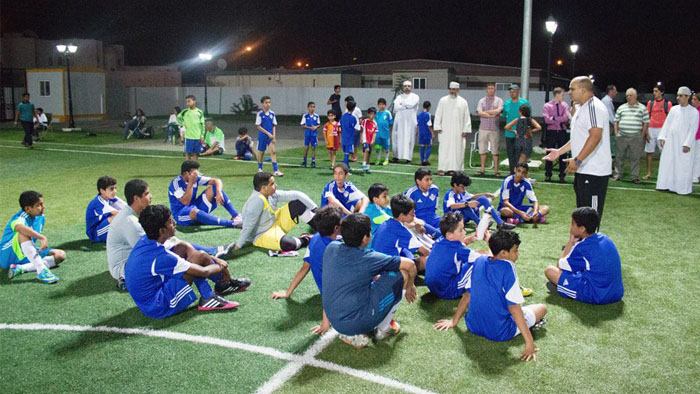 With Oman’s leading private football academies now having earned a name for themselves in youth development in the Sultanate, they are looking to kick on and help oversee the growth of the next generation of footballers in a stronger and better manner.
The Muscat Football Academy – which was established in 2014 – and the Juventus Academy Oman — which arrived in Oman only earlier this year — are both going strong both on and off the pitch, and with their new terms having just begun, are keen to aid in the development of the Sultanate’s youth.
“The second-term registration has been going very well, because of an increase in numbers, but also I think because the weather has been getting better,” said Chuck Martini, head coach of the Muscat Football Academy.
“I believe that we’ve been doing well on the field and off the field, and us opening two new centres has increased our popularity across Muscat, so may it long continue.
“We are about to participate in the UAE Cup in December, which will be hosted at Dubai Sports City,” he added. “We flew out on the 29th of November, to represent our lovely country Oman. It was a difficult tournament, but I am confident that we now look very strong across some of our age groups.”
**media[783681]**
Former Leicester City and Morocco international goalkeeper Martini did need to set up a footprint for success in Oman before people had heard of his academy — the first in the country — but he now has plans to expand even further.
“I am also working on a separate project, which will be launched soon,” he revealed.
“It is going to be a fantastic one, involving some very big teams in the world of football coming to Oman. This is something that’ll excite a lot of the public in the Sultanate and capture the imagination of all the youths. This has been rubber-stamped by the government, so now it’s about getting it up and ready and launching it. We look to begin this sometime in December.
“My first speech when we had an induction was team spirit and that was to be supportive to every team member, regardless of whether they make a mistake that causes you to lose the game,” added Martini.
“You must be supportive to one another. I don’t believe in team spirit of fighting each other and cussing each other. I believe in encouragement.”
While the MFA may have taken some time to establish itself, Juventus Academy Oman come to the nation with the backing of a very solid and reliable global football icon. Assisted by Italian giants Juventus, the academy opened its doors earlier this year, and has been rapidly gaining popularity among footie aficionados in Oman.
“We have had very, very positive feedback from parents, who say it is very structured and very professional,” said Gerald Lami, senior coach for Juventus Academy Oman.
“They love all the coaches so they have seen a vast improvement in the children, and that’s very valuable feedback from the parents.
“We are planning to have a lot more players this time than the previous term, and are looking to have good numbers,” he added.
**media[783682]**
“The coaching philosophy at Juventus Academy Oman involves taking youth and teaching them the importance of a good work ethic, teamwork, being confident and working together, so football is just a tool to bridge that gap.”
Lami hopes to see players such as Gianluigi Buffon, David Trezeguet, Alessandro Del Piero, and Lilian Thuram come here to give coaching sessions to these players in the future.
“Our main objective is to make children enjoy football, and anything that happens after that makes us very happy because it shows we are doing things the right way,” he revealed. “If parents would be interested in looking into a sports scholarship with universities, we’d try to help them out there as well.
“The Juventus way is to develop people before players, and to teach them about the importance of doing the right things in life,” added Lami. “When they get older, then maybe we can talk about the competitiveness which will kick in. We do try and incorporate a bit of competitiveness, but that is not really our primary objective.”
—[email protected]