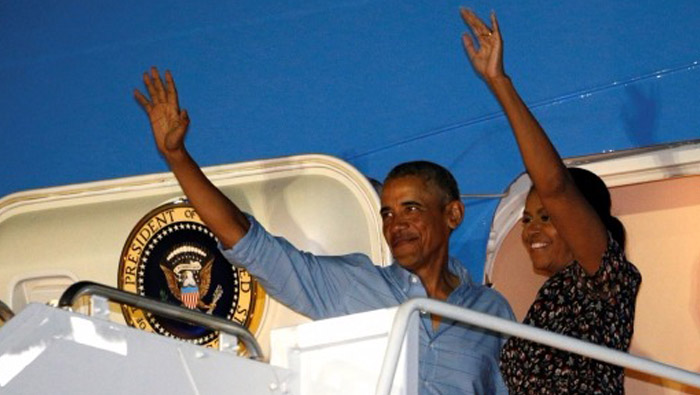 Washington: Barack and Michelle Obama said Monday they were "delighted" to learn of the engagement of Meghan Markle and Prince Harry, whose Invictus Games the former presidential couple has actively championed.
Britain's royal family announced earlier Monday that the one-time playboy royal would marry his American actress girlfriend early next year, confirming months of speculation.
"Michelle and I are delighted to congratulate Prince Harry and Meghan Markle on their engagement. We wish you a lifetime of joy and happiness together," Obama tweeted -- stealing a march on Donald Trump's White House which had yet to officially react to the engagement.
Both Barack and Michelle Obama are known to enjoy a warm relationship with Harry, and personally attended several editions of the prince's Invictus Games for wounded servicemembers -- most recently in Toronto in September where chummy pictures of Harry and Obama sparked talk of a "bromance" between the pair.
By contrast, Harry's bride-to-be Markle has been an outspoken critic of Obama's successor Trump, and at one point vowed to leave the United States for Canada if he won election.
The British royal wedding is to take place in the spring, after which the newlyweds will live at Nottingham Cottage in London's Kensington Palace, where William and Kate -- the Duke and Duchess of Cambridge -- also live with their children.
In the couple's first interview after their engagement was announced, they revealed they knew little about each other when they were set up on a "blind date" by a mutual friend in July last year.