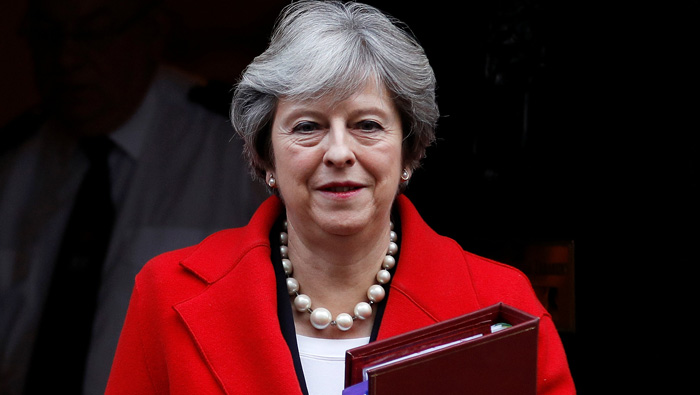 London: British Prime Minister Theresa May slashed property purchase taxes for first-time buyers in a bid to win over younger voters who have shunned the ruling Conservatives because they are unable to buy a home.
A shortage of affordable housing in Britain has forced many people to live with their parents for far longer, to rent well into their 30s or buy properties further away from their place of work, pushing the issue to the top of the political agenda.
May is anxious to show that her government is meeting the needs of those in their 20s and 30s, who largely backed the opposition Labour Party in June's snap election, depriving her of a majority in parliament.
Finance minister Philip Hammond announced the move in his annual budget statement. It means a buyer will save up to 5,000 pounds ($6,625) on a new home due to the change in stamp duty, a tax paid on property purchases, which takes effect immediately.
"When we say we will revive the home-owning dream in Britain, we mean it," Hammond said. "We do not underestimate the scale of the challenge, but today we have made a substantial down-payment."
Stamp duty will be abolished for all first-time purchases of homes up to 300,000 pounds and on the first 300,000 pounds of the price of homes up to 500,000 pounds to help those in high-cost areas like London.
The announcement should benefit 1 million people over the next five years, the government said. The average house price in London is nearly 500,000 pounds ($663,000), around 15 times the average London salary, according to official data, making many areas of the capital unaffordable for young people.
When asked about the cut in property purchase taxes, Sam Adefe, 27, head of design at an art firm, said: "It sounds good but I don’t trust the Conservatives. Where was this a couple of years ago?" Adefe said he was thinking of renting next year though he wants to eventually buy a home.
Britain's official budget watchdog, the Office for Budget Responsibility, said the stamp duty cut could in fact push house prices up, meaning the total cost of buying a home would rise for first-time purchasers even with the tax reduction. "The main gainers from the policy are people who already own property, not the FTBs (first-time buyers) themselves," it said.
The Conservatives haemorrhaged support among the under 45s in June's snap election to the Labour Party, which has promised a mixture of nationalisation, more public spending and tax rises on wealthier people to deliver a fairer economy.
Just over 60 per cent of 18-24 year olds and 56 per cent of 25-34 year olds backed the opposition Labour Party, while only 27 per cent supported the Conservatives, according to data from pollster Ipsos MORI.
But in a series of measures designed to win back voters, Hammond said on Wednesday he would make a further 15 billion pounds available to build 300,000 homes per year, far higher than the 217,350 new homes that came onto the market in 2016/17.
Britain hasn't seen that level of housebuilding since the late 1970s, after which then prime minister Margaret Thatcher introduced a series of measures to stop the mass-building of social homes.
Housebuilders have said they would never be able to meet the level of housing required on their own, and some have even slowed the pace of land buying and planning consent applications in response to signs the market has cooled in recent months.
In a further measure designed to deal with public anger over rising living costs, local councils will also have the power to double an annual charge paid by homeowners who leave their properties empty, a move which could hit foreign buyers.
Some voters who spoke to Reuters on Wednesday backed measures such as the stamp duty cut but said the government needed to focus on cutting house prices, while others were sceptical about the government's motivations.
Jordan Peploe, a 24-year old quantity surveyor, said the Conservatives were clearly targeting younger voters since losing their majority in the June election but said plans to support home ownership were to be welcomed. "Anything to help first time buyers get on the market is always a plus, but in my opinion they should be doing more to actually bring down the prices of houses," he said.