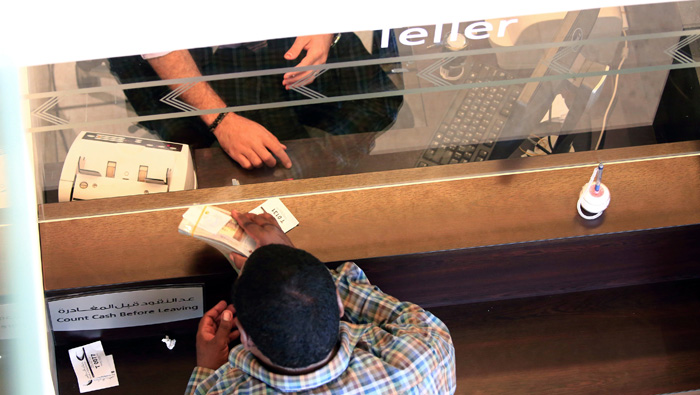 Khartoum: Sudanese security forces launched a crackdown on black market currency trading on Tuesday to curb a parallel market that has undermined its banking system, with some importers halting activity amid a dwindling supply of dollars.
Sudan's pound has weakened sharply because of a shortage of foreign currency, hitting a low of 27 pounds to the dollar last week as businesses, refused by banks, turned to an increasingly expensive black market.
Pressure on the pound comes weeks after the United States lifted 20-year-old economic sanctions, potentially opening the long-isolated country to more foreign investment, but increasing demand for currency from traders looking to tap markets abroad.
Central Khartoum on Tuesday saw a heavy security presence around commercial areas typically associated with black market trading. Traders were largely absent from posts they usually occupy outside banks and businesses where currency deals are conducted, a Reuters witness and traders said.
"We stopped working out of fear of being arrested. Security forces are carrying out intensive campaigns ... but we will probably return to work next week ... there are no dollars in the banks and the price there is not real so people are going to return to us," one black market trader said. General prosecutor's office said in a statement on Monday they would start controlling the black market and charging traders with financing terrorism, money-laundering and destroying the economy.
The central bank holds the official exchange rate at 6.7 pounds to the dollar, but the rate is largely only accessible to importers of essential goods like wheat and fuel, creating major demand for black market dollars.
In a bid to stop the currency's freefall the government on Monday announced emergency measures, placing restrictions on the import of luxury goods, capping currency transfers, and announcing legal penalties for black market dollar trading.
One day after the measures the currency strengthened to 23 pounds to the dollar from 24, currency traders said. Some businesses have halted operations since last week because of uncertainty over the exchange rate.
"We have stopped selling since last Thursday ... we will return to selling once the exchange rate is relatively stable," said the manager of a company that imports agricultural equipment.
Some businessmen said Sudan has little choice but to float its battered currency, a move they said would close the gap between the official and unofficial currency rates and bring dollars back into the formal banking system.
"The root solution is to float the curency and leave the exchange rate to market forces. This may create problems in the short term but over the long term it will achieve price stability and bring resources back to the banks," said Amin Abbas, spokesman of the Federation of Sudanese Businessmen. The weakened pound has contributed to soaring prices in the import-dependent country, with inflation at 33.08 per cent year-on-year in October.