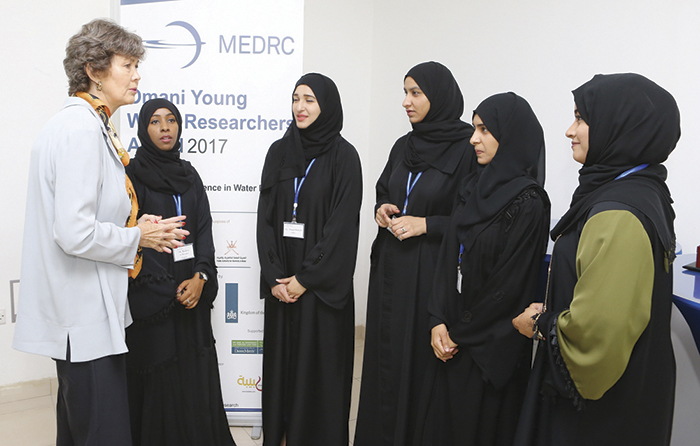 Manal Al Balushi was named the recipient of the first Omani Young Water Researcher Award by the Middle East Desalination Research Centre (MEDRC). The young researcher was nominated alongside fellow women and was awarded at a ceremony held on October 4 at their headquarters in North Al Hail.
Manal, a student majoring in civil engineering at the Middle East College, was always eager to contribute to the society. She was part of the engineering village and worked as a planner for constructions. Most recently, she wrote a research paper on water, after her interest was piqued by an environment-related course she took in college.
She conducted research on water from 2010 to 2014, as a case study in the wilayat of Seeb, to explore the reasons behind water losses in that particular part of the city. She collected data from the Public Authority for Electricity and Water and used an international-standard software called American Water Works Association to audit the percentages of water loss. Manal’s paper carried information about her findings on water balance and consumers.
**media[777020]**
The winning research paper was produced under the supervision of Dr Mohammed Abushammala at the Middle East College and was titled ‘Water Loss Investigation in Muscat: Al Seeb Water Supply System — A Case Study’.
“Our recommendation is to build a water prediction model to predict water leakages, so we can minimise and repair them,” said Manal.
The award was introduced by Dr Jauad El Kharraz, Head of Research, to encourage and motivate students to turn their focus on water and to reward them as well. Manal’s achievement is an inspiration that is paving the way for young Omani women to take up research, as well as encourage young Omanis in general to talk about water-related issues.
The award was sponsored by the Embassy of Netherlands in Muscat and Omar Zawawi Establishment, and the winner was given an all-expenses paid trip to the Netherlands to take part in the Amsterdam International Water Week.
“I was shocked, but it was a nice experience,” exclaimed Manal when asked about winning the award, adding that being part of this research had taken her outside her comfort zone and into the field of research. She extended her gratitude to the MEDRC for offering its support.
Manal plans to work in different areas of water research. With the help of esteemed researchers, she is, without doubt, on her way to another milestone in this important field.
**media[777021]**
Laetitia Van Asch, Ambassador of the Netherlands to Oman, remarked, “I am proud of all the Omani participants in this contest and most of all, proud of the winner! These fine young researchers are the future for water scarcity solutions. As a result of the history of living with water, the Netherlands sees water cooperation and innovation as a necessity, not a luxury. This Omani Young Water Researcher Award is part of this international cooperation to find solutions for water challenges together.”
–[email protected]