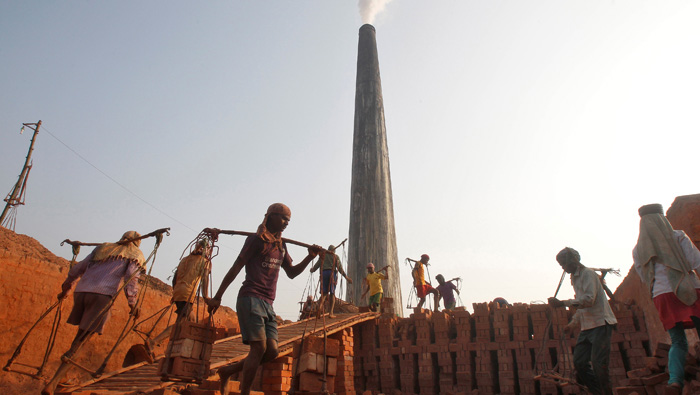 Chennai: As tens of thousands of families in India's eastern state of Odisha begin their autumn migration in search of work, the government is stepping up efforts to ensure their journey doesn't end in slavery.
November sees families from rural Odisha leave their villages as part of a seasonal migration that lasts until the spring planting season. Drought and dire poverty force men and women to take loans from labour agents in every village. They spend the next six months working - usually in brick kilns - to pay the debts back. Rights groups say this "debt bondage" is a form of slavery.
This year, however, the Odisha government has launched a raft of measures to protect workers - from an online app that allows easy registration of migrants to a 24/7 helpline, credit cards for safer loans and work contracts with brick kiln owners.
"There has been a steady flow of complaints and rescues of bonded labourers from Odisha over the years," said B.B. Acharya, consultant to the inter-state migration cell, a part of the labour department looking after the rights of migrant workers.
"This is by far the most comprehensive plan that is looking at both safe migration and providing more livelihood options." Campaigners estimate that over 100,000 labourers migrate from Odisha annually, the majority of them ending up in kilns where they cut, shape and bake clay-fired bricks, their wages deducted to pay off the loan. Workers need to make almost 700,000 bricks to pay off a debt of 20,000 rupees (about $300) over six to eight months.
"Prolonged droughts have created this mechanism of taking money in advance that eventually leads to bondage," said Mary Surin of the charity Tata Trusts that is partnering with the government to map vulnerable workers.
The Odisha government has mapped 28,000 households of vulnerable migrants across nearly 300 villages in 11 migration-prone districts.
This year it launched the 'shramik sahayata' (workers' help) app allowing villagers to register online before migrating and has established helpdesk kiosks and a phoneline for migrants.
"We are setting up five helpdesks in destination states where labourers are going to spend six to eight months working," said Odisha labour commissioner Sachin Ramchandra Jadhav.
"Along with the toll free helpline that is already running, we hope to help workers at every step." The Odisha government has also helped to draw up direct contracts between workers and 100 kiln owners in the southern states of Andhra Pradesh and Telangana in an effort to cut out agents and end the practice of debt bondage.
"The exploitative middleman will slowly cease to exist," Jadhav said. "We are looking at tying up with banks to pay workers directly using savings bank accounts and they can also avail advance money through labour credit cards."
The project hopes to reach 2.5 million workers by March 2018, ensuring they are accounted for in the system and are part of the safe migration programme, he said.